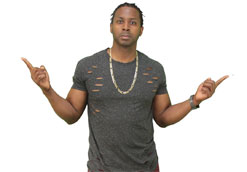 Originally from the Bahamas, IBRU blends reggae, dancehall, and hip-hop with a touch of pop influences for a sound best described as reggae fusion. He gained substantial knowledge about himself through being an Iraqi War veteran, and managed to come out a stronger man, sharing his experiences with the world through his music.With the energy of a ravenous pit bull, he has seen combat but is now ready to fight the good fight in the music industry.

Growing up, IBRU looked up to his grandmother for strength, support, and direction. His vigor and work ethic acted as the foundation of his central personality as he grew up and evolved into the force he is present day. His military service transformed him into a powerhouse as he dealt with extreme heat, trenches, and unsafe living environments while performing his duties in battle. IBRU has seen it all and is no stranger to rising up from the struggles of life, offering guidance through his music. Not only has he served his country, he has a Master’s degree in business leadership which he is now applying to his music career. His recent singles – the vibrant “My Life,” the revengeful “She Nah Leave Mi”, and the wholesome “Apologize” – are all teasers to his forthcoming debut album Life Story and set up the foundation for his recent heavy video release, “War and Violence.”

Directed by Christopher Campbell, the “War and Violence” video opens up with a wipe transition and pans to IBRU in the streets of the Caribbean as he begins to sing about real life issues that the world is facing. He touches on political corruption, moral fraudulence, and the current state of society while he tries to battle through conflicting misguided egos. Pictured in a camo shirt, he places himself in the war once again to symbolize that we all are a part of this battle, using realistic and blunt imagery to try to get through to the audience. Once the curtains of the delusion are unveiled, he wishes for a better future for his people. Although it is littered with Martin Luther King Jr. imagery, he doesn’t just touch on black excellence, but it is more universal- bringing up issues such as violence in the street that is affecting all colors and walks of life. Using his background as a soldier he uses his wisdom and different perspective to shed light, and finally, his life comes together as he creates meaning by being a prophet and a role model for the youth.

Here at HIP, we’re thrilled to be working with IBRU to promote the Martin Luther King Jr. themed “War and Violence” music video! We hope you love this clip as much as we have and consider including them in your regular programming and online presentations. Rest assured we’ll have plenty of IRBU merch available for on-air contests and giveaways so don’t hesitate to get in touch. For more information on IBRU, please contact Andy Gesner and the HIP Video Promo team at (732)-613-1779 or email us at info@HIPVideoPromo.com. For recent updates on IBRU check out www.Instagram.com/IBRUmusic and www.Facebook.com/IBRUmusic.