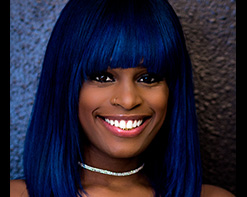 Once in a lifetime, an artist comes around who truly has the whole package: talent, skill, smarts, beauty, and an impeccable work ethic. Imaní Scott is a fireball that is crash-landing into the music industry. Her unequivocal confidence is a quality that only the greatest leaders share.

Hailing from Houston, Texas, she is a fierce force to be reckoned with. Her mission: To bring intelligence back to people listening and get the human race to level up. There are human aspects of living that we have forgotten, and Imaní Scott is here to remind us of them. With her last singles, “Get Litty” and “All Over Again”, she found her footing in the next generation of pop by honoring the sounds of better days. Her brand new single, “Throwing Glitter” solidifies that she truly is the artist espousing the complete package.

Imaní Scott is a graduate from Sam Houston State University. Her debut album, aptly titled An Introduction, was released in the first week of October. Produced entirely by heavy hitter Isaac “Chill” Yowman, Scott is truly making a funky first impression. Her eclectic modern sound is heavily influenced by the classics. Prince, Beyonce, Missy Elliot come to mind with the first slaps of the bass on this record. Decades of dance music with a modern twist and a strong female protagonist make up the key points in this textbook of funk.

Her newest single “Throwing Glitter” is a powerhouse. This song pushes the sound even further with deep instrumentation and an attitude that instantly puts Scott in a position of power. The music video for this song takes her to a new stratosphere. Crisp, like the bite of a fresh apple, the bright coloration of the video immediately grabs the attention of the viewer. Shots overflowing the screen with the quintessential Imaní Scott blue make it impossible not to be enthralled with every move she makes. The next generation of pop stars are coming, and their leader is Imani Scott.

We are absolutely ecstatic to be teaming up with a true leader like Imaní Scott to bring you the “Throwing Glitter” music video, and see it included in your regular programming. Don’t hesitate to let us know what we can do on our end to make that happen. Please contact Andy Gesner and the HIP Video Promo team at (732)-613-1779, email us at info@HIPVideoPromo.com or visit www.ImaniScottMusic.com for more info on Imaní Scott.