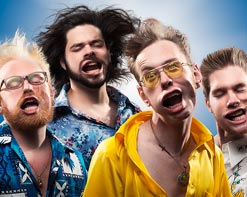 Injecting Strangers is a theatrical indie-rock band hailing from Cincinnati, Ohio. Blending dark themes with glammed out guitars, this emerging band is fairly new to the scene. Collaborating members have teamed up in early September of 2013, and have since then been working to complete their debut full-length album. HIP Video Promo is excited to introduce the long awaited clip for the single “Detroit.”

Four unique members make up Injecting Strangers and seem to pick up the pace wherever the other has left off—Dylan Oseas, the funky, raw bass player, provides the fundamental groove, where Chase Leonard keeps time and holds the beat of percussion. Peter Foley’s crispy, clean guitar melodies pour out on top of Chase and Dylan’s monstrous rhythms while singer Richard Ringer takes the band to a whole new level. Lyrics of questionable themes and tragic irony give Injecting Strangers the right amount of edge and keeps listeners on their toes.

After releasing their debut EP Nightmare Nancy, the band has received due followings. Featuring a two-part horror story, Nightmare Nancy Pt. 1 and Nightmare Nancy Pt. 2, the single “Lucky” unfolded in November of 2013. Currently performances such as MidPoint Indie Summer have been serving fans a taste of this teeming, evil and exotic music. However, on August 12th of this year, Injecting Strangers released “Detroit,” their new single and music video, and their highly anticipated full-length album Patience, Child will follow on Halloween!

Just when you thought the theatrical performances were enough, Injecting Strangers provide you with a home-hitting single “Detroit.” Goldie Fontana Productions presents the newest clip, which brings the strong characteristics of front man Richard Ringer to life. With a captivating storyline that is rich with darkness and satire, audience members will find it hard to look away from this gruesome clip. Keep in mind the lighthearted and ironic nature of the clip, though—it’s a fast ride of emotions and metaphors, two aspects that define Injecting Strangers to a tee.

For more information on this exciting new band and their eclectic new clip “Detroit,” please contact Andy Gesner and the HIP Video Promo staff at (732)-613-1779 or email us at info@HIPVideoPromo.com.