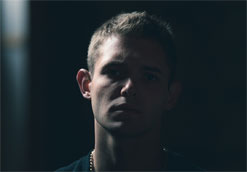 “Yeah, I tried to sell out”, concedes Isaac Castor in the playful clip for “Da Bounce”, his latest single, “I didn’t sell none”. Candor like that from a talented rapper is refreshing and unexpected, but honesty is what distinguishes Castor from his peers. He’s open about his limited bankroll, his distaste for emcees who push drugs in their songs, and his frustration that he isn’t world-famous yet. Well, give it some time – Castor is only 22 years old. He’s already developed a signature sound, style, and approach to lyrics. Our prediction: if he keeps writing songs as irresistible as “Da Bounce”, he’s going to need some new things to worry about.

The Michigan-based rapper has already built an impressive resume. He’s opened for Mac Miller, he’s been praised by XXL, and he’s appeared at the Vans Warped Tour. Old Soul, his new set, features guest performances and production from some of the most intriguing artistic voices in contemporary hip-hop, including Nate Fox, who worked with Chance the Rapper in the Social Experiment, the incendiary L Gulley, and the always-thoughtful Blu, author of countless classic verses. “Da Bounce” was produced by L05, a fearless Los Angeles musician whose work with the futuristic Celsius Electronics splits the difference between gritty hip-hop and classic Motor City electronic music.

For this track, L05 keeps it straightforward, and gives Isaac Castor plenty of room to get confessional, crack wise, and introduce himself to the uninitiated. They’ve also come with a rapped chorus that’s liable to get lodged in your head indefinitely. “Da Bounce” makes good on all the promise that Castor has shown on his mixtapes and independently released albums – it’s the sort of undeniable performance that puts a regional artist into the national conversation.

He’s been building toward this for years: Castor began rapping when he was 9 years old. As an acknowledgment of the kid he used to be, the “Da Bounce” video pairs Castor with a cocky junior version of himself. They dance together in a boxing ring – a symbol of the struggle to be heard that the emcee has always faced. But there’s nothing humorless or combative about the clip, not even the baseball bat that Castor keeps swinging around for emphasis. Instead, it’s a joy from beginning to end – a swaggering thrill show that’s truly reminiscent of classic rap clips.

Here at HIP Video Promo, it’s a thrill and profound honor to partner with Isaac Castor to share the brand new “Da Bounce” video with the world! Please don’t be shy about getting in touch to let us know what we can do on our end to get this stellar clip included into your cherished programming and online presentations. Rest assured we’ll have plenty of Isaac Castor merch to set up online/on-air contests and giveaways throughout the campaign, so reach out to us if you’d like to get your hands on some. Please contact Andy Gesner and the HIP Video Promo team at (732)-613-1779, email us at info@HIPVideoPromo.com or visit www.HIPVideoPromo.com or www.isaaccastor.com for more info!