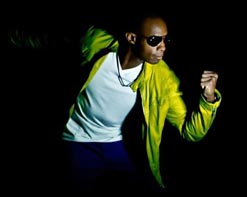 James Doré is an singer, songwriter, and dancer who combines the genres of R&B, pop, and electronica into a a head-nodding, heart-pounding mix. His music ranges from slow jams to dancefloor dynamite, but his voice–sweet, sexy, and strong–is the common thread and the reason why you should know his name. HIP Video Promo is delighted to present the clips for his two singles, “Shut Up and Dance” and “See You Again.”

Raised in Washington State, Doré got his first taste of show business at age six, doing voiceovers for the Seattle School District. He embraced breakdance culture, specializing in “poping” on the streets and in all-ages clubs as the art form began to take hold. Later on he would join the OSU Breakers, performing at football half-time shows, university events and parties.

At age 21, Doré travelled up and down the West Coast and all the way to Hawaii, showcasing his unique blend of street and dance club styles. Eventually, Doré began a successful weekly residency at the famous Hilton Hawaiian Village impersonating his hero Michael Jackson. Although he was asked to continue this act in Bermuda and Japan, he ultimately turned down these offers in order to further develop his craft and create his own music.

In 2003, he dropped his first LP, Private Party, and began turning heads throughout Arizona where he was quickly recognized as one of the hottest up and coming artists. In 2011, he collaborated with producer Chris “Starr” Walker (Omarion’s “O”) to create “The EP.” That collection features “See You Again”–a deep, modern R&B ballad with ethereal keys and an ice cold beat, where Doré clearly communicates the pain and longing he feels after driving away the one he loves. In contrast, on “Shut Up and Dance”, Doré sings an ode to the pure bliss of music, movement, and physical connection on the dancefloor. The track simmers from the jump and quickly builds into a propulsive, runaway party anthem. A guest rap from James “Fenix” Wallace perfectly spikes the already intoxicating punch of this heady track.

Both videos were produced by 6MIC FILMS and work as two parts of the same movie. In the first, “See You Again”, Doré and his lover–played by the beautiful Sheba Shaffie Price–are seen happy and very much in love before something she sees on his phone causes her to abruptly walk out on him. Throughout the video, Doré–handsome, stylish, and pained–sings his heart out to the camera alone, in various beautifully-shot settings, intermittently flashing back to their brighter past. The second video, “Shut Up and Dance”, begins with Doré, Sheba, and their friends lounging in his livingroom where they’ve just finished watching the final cut of “See You Again.” With everyone in a celebratory mood, Doré recommends heading out to a club up the street, before he’s overruled and they host the party in his beautiful home, complete with food, music, dancing, and, of course, an outstanding performance from Doré himself, singing the track with a colorfully attired group of dancers behind him executing high energy choreography. After nightfall, Doré gets his wish, and the party moves to the club anyway where everyone follows his lyrical commands: “Just feel the music / just shut up and dance.”

For more information on this exciting artist or either of these two great clips, please contact Andy Gesner and the HIP Video Staff at (732) 613-1779. or e-mail info@HIPVideoPromo.com . You can also visit www.Reverbnation.com/JamesDore/ for more info.