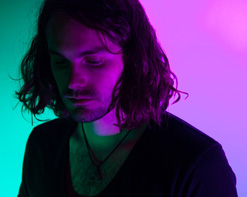 Born and raised in rural Connecticut, Justin P. Romanos got his musical start recording in his makeshift home studio and as a regular in the local DIY scene, but it was at Drexel University- where he studied Music Industry- that he earned the nickname J Pré, a reference to an early band called “the Justin P. Romanos Experiment.” Through college he was the vocalist and conceptualist of indie-rock band SHMNS, and after graduation relocated to Brooklyn, where he reestablished himself with a brand new moniker: Jay Pray.

While this is the first album he’s created as Jay Pray, Romanos is no stranger to being a solo artist, having spent more time performing solo (since he was in sixth grade) than he did in a band. Produced by Brandon Bost at Electric Lady Studios, Jay Pray is a lush landscape of electro synth-pop tones, both sultry and full of sunshine, as every detail is perfectly crafted into place. Earmilk calls it “shimmery synth pop magic” and Bullett says it’s “so much fun it’s easy to lose sight of the subject matter and just get carried away by the fun of the beat and the exuberance of the arrangement.”

The video for lead single “Smile” premiered earlier this month on PureVolume. Our story begins with a woman setting up a projector in various locations like an empty swimming pool and a rickety fence, where she watches memories that she’s shared with her husband, who is revealed to have Alzheimer’s Disease. She’s happy at first, as she remembers times they were younger and carefree- like the time they jumped into a neighbor’s swimming pool or the time they rode in a hot air balloon. We then see her arrive at the hospital, where a nurse wheels her husband into the room. At first, he nervously glances around trying to figure out who she is. In an attempt to spark his memory, she projects videos of their shared memories all over the room. He looks at her and begins slowly shedding tears as memories fight to breakthrough.

We’re very excited to be working with Jay Pray on the wonderful video for “Smile.” The visceral reaction this video has given all of us here at HIP Video Promo is one we’re eager to share with programmers and viewers alike. Please contact Andy Gesner and the HIP Video Promo team at (732)-613-1779, email us at info@HIPVideoPromo.com. You can also visit www.JayPray.com for more info on Jay Pray.