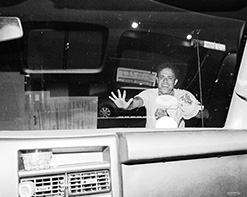 Where to begin with a man like Jeff Rosenstock? His first or second band? His career as a producer? His work in television? For an artist who embodies the “roots” in “grassroots,” it seems only logical to take it from the start.

Rosenstock first became a blip on the radar of the North Atlantic punk scene as the frontman of Bomb the Music Industry! from 2004-2014. Known for their DIY punk ethic, the band set themselves apart by distributing six albums worth of material for free online, consistently playing all-ages shows for no more than $10, and even letting fans and friends play songs live with the band if they learned a tune and brought an instrument. By the end of their stint, the band had inspired a new generation of young punks around the world. To fans’ dismay, BtMI! played their final show in Brooklyn in January 2014.

After a decade of cutting his teeth with Bomb, he switched gears to produce records for the likes of Mikey Erg, Dan Adriano, and The Smith Street Band, but his love for songwriting persisted, compelling him to release new records under his own name. Rosenstock struck punk gold in the form of 2016’s Worry: a 17 track album squeezed into under 40 minutes that prompted Jeff and his new band’s first television appearance on Last Call with Carson Daly, as well as praise from major press outlets like USA Today naming it the #1 album of that year. With new-found success came a demanding touring schedule that saw the band on the road for two years straight, only pausing to record new music.

That new music manifested itself in a surprise New Years Day release of the fiery follow-up album entitled, POST- (Polyvinyl Record Co.). The sonic makeup of the album reflects the mind of a man on the road with such honesty and clarity, which can likely be attributed to the fact that it was written in a double-wide trailer in the Catskill Mountains. Among the tracklist of blood-thirsty scream-alongs, “Melba” shines through with its relatable lyrics about forgetting who you are with age and losing touch with the fleeting dreams of the young mind. Paired with a music video that induces out-loud-laughter due to its relevant ridiculousness, “Melba” reminds us that sometimes the best thing you can do, is just start breaking stuff. Maybe Limp Bizkit was on to something…

As a cherry on top, Jeff is adding to his resume off the stage, composing all the music for a brand new Cartoon Network program, Craig of the Creek, airing this year. We’re profoundly thrilled to be working with the poster-boy for DIY, Jeff Rosenstock to bring you the “Melba” music video. It’s our sincere hope that you and your viewers will flock to “Melba”, share it on your socials, and add it to your programming in a timely fashion. Rest assured we will have plenty of outstanding Jeff Rosenstock merch to set up online/on-air contests and giveaways throughout the campaign. Don’t hesitate to let us know what we can do to help you spread the importance of Jeff Rosenstock. Please contact Andy Gesner and the HIP Video Promo team at (732)-613-1779, email us at info@HIPVideoPromo.com. You can also visit www.PolyvinylRecords.info or www.JeffRosenstock.bandcamp.com for more info on Jeff Rosenstock.

For info about other Jeff Rosenstock videos, click HERE