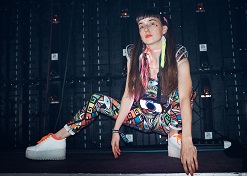 Jessiquoi would be the first to tell you: all music is world music. All styles come from somewhere, and modern pop songs are juxtapositions of sounds that have developed in disparate cultures across the globe. But we’re pretty confident that there are few artists anywhere who are making cultural connections with the audacity and alacrity that Jessiquoi does. North American pop, East Asian folk, Teutonic electro, bhangra: it’s all there in her songs, and it all fits together seamlessly. A Jessiquoi track is a breakneck trip around the planet – and you’ll never know where she’s taking you next.

She was raised in Australia, came to fame in Switzerland, and she’s traveled all over the world. She’s been inspired in equal measure by British rappers and Japanese anime. But it’s not about the stamps on her passport; it’s about the size of her imagination. She’s the sort of producer who can drop a digital synthesizer next to a classic Chinese GuZheng harp in a manner that amplifies the qualities of both instruments. In short, Jessiquoi possesses a rare kind of musical intelligence, and her current base has begun to take notice: she’s been invited to play at some of the biggest festivals in Switzerland, including Zurich Openair, Gurten, and the Dachstock.

“The Addict” is bound to be another hit for the singer, songwriter, dancer, and electronic producer. But the half-sung, half-rapped track is destined to reverberate far beyond the borders of her home country. It’s energetic, stuffed with melodic and rhythmic ideas, and decorated with beats and bars that testify to Jessiquoi’s extensive travels. Anything this explosive can’t possibly stay under wraps for long.

If you’ve been lucky enough to catch Jessiquoi in concert, you’re surely familiar with the artist’s handmade wooden wagon. It contains all of her most valuable accessories – her best electronic equipment and souvenirs from her trips to Asia – and it goes wherever she does, including onstage. The wagon makes an appearance in the dazzling, heady, sci-fi-influenced video for “The Addict”: it’s the forge in which the artist designs her radical sound, and the focal point of a laboratory. Jessiquoi sets the clip in a futuristic pan-Asian society where scavengers salvage and re-purpose old technology from decaying European states. She’s one of the raiders, of course, and she’s busy designing a better, fuller, more cosmopolitan world.

Hop on board for the ride with Jessiquoi’s brand new clip for “The Addict”! Here at HIP Video Promo we are quite smitten with Jessiquoi and sincerely hope you embrace this video as much as we have and consider including it in your programming and online presentations in a timely fashion. Rest assured we’ll have plenty of Jessiquoi merch available for on-air contests and giveaways, so don’t hesitate to reach out if you’d like some. For more information on Jessiquoi, please contact Andy Gesner and the HIP Video Promo team at (732)-613-1779 or email us at info@HIPVideoPromo.com. Visit www.Jessiquoi.com for more info.