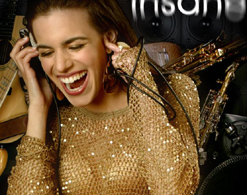 What’s up friends and colleagues! It’s Andy Gesner and the staff from HIP Video Promo, back with another entertaining clip from one of our favorite locally based artists. New Jersey has always been a cradle for ambitious pop singers. From our vantage point at HIP HQ – right in the middle of the Garden State – we’ve had the pleasure of watching Jill Criscuolo establish herself as one of the most promising young vocalists working within the genre. While it was our privilege to help spread the word about “I’m Sorry”, her electrifying second single, we could hardly compete with the wild enthusiasm of her international online fanbase. Criscuolo’s perfect realization of the sound and spirit of mid-Eighties dance-pop made the remix of “I’m Sorry” a mandatory download for clubgoers in 2006. Although it was an indie release, the record was added to more than 300 radio playlists, and introduced thousands to a fresh voice and an artist on the rise. For an encore, she’s upped the ante considerably. If “I’m Sorry” was her “Lucky Star” – an effervescent, glittering, reflective breakthrough-number – then “Insane” is her “Burning Up”. Criscuolo and her producers dig into the groove and refuse to let go; this song is primal, carnal, and near-dizzying in its kinetic energy. The singer’s performance is similarly charged: she sounds giddy and pleasurably destabilized, and she sustains that mood through the track. But it’s not a boy she’s shouting about here. Instead, “Insane” is a paean to her true love – pop music in all its dazzling, delicious forms. She’s wild for the sound of it, captivated by the rhythm, and she’s coming to take her deserved place among the commercial radio favorites.

Certainly her independently-produced videos have the look and feel of superstar vehicles. A part-time fashion model, Jill Criscuolo knows how to work the lens – and she’s also been shrewd enough to cast supporting performers who are similarly charismatic. The “I’m Sorry” video told the story of a deteriorating marriage in bold, Technicolor strokes, and Criscuolo played the role of the avenging wife to the hilt. In the “Insane” video, the New Jersey singer is possessed by an entirely different sort of mania: this time, it’s music that’s driven her over the edge.

Produced by Fame Little, Vaughn Christion, and co-directed by cinematographer Lindsay Mann, the “Insane” clip is as playful, sexy, and downright engrossing as any of the delicious day-glo videos from Madonna or Tell It To My Heart. A barefoot Criscuolo lies on her back among records and musical instruments, and directs her siren song to the camera. She’s walking the streets of Manhattan and seizing musicians who strike her fancy – then, when she’s won their confidence and guided them back to her warehouse, she locks them in a room where she can view and listen to them at her pleasure. She’s only selecting the best-looking ones, of course, and when she encounters a muscular, shirtless busker (the Times Square pseudo-celebrity “Naked Cowboy”) in the middle of a city street, her need to possess him (and his music) overwhelm her. Eventually, the police become hip to her game, but when they raid her nefarious nest, they find the beat irresistible. Look for a special guest appearance at the end of the clip, too: Criscuolo has some famous friends, and at the rate she’s going, she’s sure to be acquiring more.

We want to extend our sincere thanks and appreciation to Fred Mills, Walter Brooks and the whole Destined Fate Entertainment staff for bringing us on board once again to be a part of the Jill Criscuolo promotional team. They’ve also hooked us up with copies of Jill’s “Insane” CD single, so drop us a line if you’d like to get your hands on some for you on-air giveaway needs. If you need more info, call Andy Gesner at 732-613-1779 or e-mail us at  info@HIPVideoPromo.com . You can also visit www.JillCriscuolo.com to find out more about Jill Criscuolo.