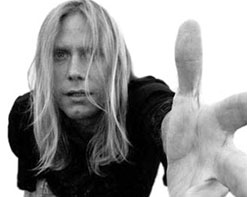 Greetings programmers! Just in time for the warmth of sunny spring, we’ve got a fantastic ballad coming your way from a Miami native, with personality and frontline experience to boot. Jim Camacho has been rocking since the early 90s with his indie and major label contracted group The Goods. With numerous albums behind his belt, including a rock opera titled 5 Steps To Getting Signed, which SPIN claims is “is a bona fide masterpiece.” Camacho, a restless creator and composer, has also written several movie soundtracks and Broadway style musicals. Jim Camacho’s movie soundtrack contributions include the Grammy nominated, Tom Dowd & the Language of Music, Paris Hilton’s Pledge This, and Fatboy, which was nominated at the Sundance Film Festival for Best Use of Music in a Documentary. Jim Camacho gloriously returns to the art of pop rock songwriting with his brand new clip for “Is It Me.”

“Is It Me” is the newest single from Camacho’s new record,Beachfront Defeat. Camacho has earned himself numerous awards, including Miami New Times’ “Best Songwriter” and “Best Acoustic Performer,” for his ability to connect with his audience on a deeply emotional level. His music deals with the beauty of life and the constant struggle with the pain layered in between. Even thoughBeachfront Defeat is scheduled for a summer release, Camacho is already ensconced in raising buzz for the album through a busy touring schedule. Jim has toured extensively, performing at Radio City Music Hall, the Kodak Theater, and the Mirage Hotel, and has taken part in recent tours by such national acts as John Legend and Alicia Keys. Jim’s new solo album, Beachfront Defeat, is poised for a summer release.

“Is It Me” is wonderful piano rock ballad and ode to the difficulties of dissolving relationships. Somewhere between Tom Petty and The Goo Goo Dolls, the song resonates with the charm that made the 90s one of the most special times in rock and roll history. Jim Camacho takes the same unending passion he portrays in his music and transposes it into the video for the tune. In fact, Camacho grew out his hair and a full beard just so he could cut it in this clip! The scenes of the video divulge a story of a dissolving relationship and the changes that come with it. Camacho’s video is relatable to any age, as breakups can come at us at any time and when we least expect them.

We are pleased to bring you an artist who is fully devoted to his craft and pours out emotion at every note. We’ve got plenty of copies of Beachfront Defeat on hand, so feel free to reach out for all of your Jim Camacho needs. You can also visitwww.JimCamacho.com to find out more about Jim Camacho.