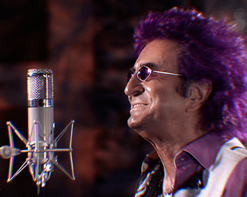 Sure, there are plenty of hit songs in circulation right now. There always are. But how many of today’s hits will people still be singing in ten years? How about thirty years or dare I say forty five years? It takes a very special musician to write songs that remain in the popular imagination for decades — songs that become part of our pop-cultural heritage. Jim Peterik is one of those rare songwriters, and even if you aren’t familiar with the name, you certainly know the tunes. The music he composed in the ’70s and ’80s is as alive to audiences as the songs in the current Top 40. Yes, hits come and go, and even some Number One smashes are quickly forgotten, but “Vehicle”, and “Hold On Loosely”, and “Eye Of The Tiger” — each a Peterik-penned smash — will surely outlive us all.

Jim Peterik is a talented instrumentalist and a strong, soulful singer — he remains the front-man and the main creative force in The Ides Of March, an ambitious, horn-spiked rock band he co-founded in Chicago in the 1960s. That’s Peterik’s impassioned howl on the immortal “Vehicle”, the Ides Of March 1970 chart-topper that has been endlessly revived in films and commercials and remains a marching band standard. But it’s Peterik’s unerring ear for catchy pop-rock melody that has kept him in the music industry for more than half a century: over the years, he’s written for everybody from REO Speedwagon to the Beach Boys. He’ll always be best known, however, for his work with two of the best-loved mainstream groups of the 1980s — the classic Southern rock band .38 Special, and the inspirational Survivor. Peterik had a hand in the composition of nearly all of the hit songs recorded by both groups, including “Eye Of The Tiger,” “Wild-Eyed Southern Boys”, “The Search Is Over”, “I Can’t Hold Back”, and many other enduring radio favorites.

The Songs, Peterik’s latest full-length produced by Fred Mollin, is both an intensely personal reclamation of his catalog and a demonstration of his remarkable range as a songwriter. This is Peterik in the raw — here, he’s dramatically reinterpreting the songs made famous by the bands he’s worked with. “Caught Up In You”, one of Peterik’s best-known songs, was a guitar-driven Mainstream Rock chart-topper for .38 Special in 1982; on The Songs, the writer re-imagines it as a poised, thoughtful ballad arranged for piano and strings. Peterik has paired the song with a clip that underscores the new arrangement: the singer shares a theater stage with a group of violinists, all of whom seem utterly enchanted by the melody of the song. Like all of Peterik’s best compositions, “Caught Up In You” is timeless: its melody indestructible, its meaning delivered straight to the heart.

As fans of Peterik’s work for over four decades, here at HIP it’s our profound pleasure and privilege for us to be a part of the Jim Peterik promotional team. We would love to hook you and your viewers up with a copy of The Songs, as well as set up contests and online giveaways, so please don’t hesitate to get in touch and let us know what it will take to get this stellar video into your programming. Please contact Andy Gesner here at HIP Video Promo at (732)-613-1779 or email info@HIPVideoPromo.com. You can also visit www.JimPeterik.com for more info on Jim Peterik.