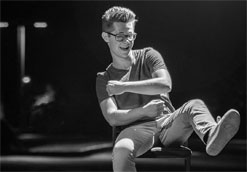 By now, if you aren’t impressed with John Paciga, you haven’t been paying attention. The New Jersey teenager has done so much – and so quickly! – that the exhilirating pace of his achievements feels hard to believe. Was it really only two years ago that he established himself, at sixteen, as a piano-rock prodigy with the exuberant Gotta Play EP? Is it possible that Other Side Of Town, the debut full-length album that showcased his formidable storytelling abilities, is a little more than one year old? What about his striking cover of David Foster and Carole Bayer Sager’s “The Prayer”? Could it be that that version – one that made it seem Paciga was Broadway-bound – was made just last spring? It’s all true. He’s packed more highlights into his school years than some adult artists do in a lifetime.

For those who believe they’ve got Paciga pegged, well, think again. No Alibi adds new dimensions to the sound he’s already developed – including a surprisingly tough, rocking guitar attack on songs like “Tantalized”. Fans of his piano needn’t worry; Paciga’s playing is skilled enough, and flashy enough, to stand up to any arrangement choices, no matter how aggressive they are. He shows he can reach for a show-stopping crescendo on the forceful “When’s The Last Time”, engage in meditative, grown-up storytelling on the winsome “Flight Delayed”, and stitch together song sections with the confidence of an experienced producer on “075”. Paciga even raps a little on “Punching Bag”, and if that isn’t experimentation enough, he crowns the song with a wild analog synthesizer solo.

These are new approaches for a singer-songwriter whose feet are already squarely on the ground, and who is busily adding to a bag of tricks that’s already stuffed. He’s already demonstrated his firm grasp of piano-pop traditionalism; what’s new on No Alibi is his fearlessness. It’s rare that an artist can boast a wide range of open doors in front of them, but Paciga certainly can. He could be a theatrical rocker at the eighty-eight in the style of Billy Joel or Ben Folds; he could take his talents to Broadway; he could come up with something entirely new and unexpected. Whatever it is, it’s going to be exciting to see it unfold – and No Alibi is a crucial, unmissable step on a thrilling journey.

To announce the release of No Alibi, we’re sharing the brand new lyric video for “The F-Word”, a catchy piano tune about a situation we’ve all found ourselves in. We’re delighted to share this clip, created by video director Rob Fitzgerald, with the world! Rest assured we’ll have plenty of John Paciga merch to set up online/on-air contests and giveaways throughout the campaign so please reach out if you’d like some. Please feel free to contact Andy Gesner and the HIP Video Promo team at (732)-613-1779 or email us at info@HIPVideoPromo.com. You can also visit www.JohnPaciga.com for more info on John Paciga.