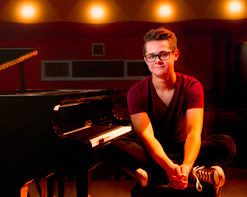 Remember that thrill you felt when you were on your own for the first time in a big city? The openness of the streets, and the feeling you could go anywhere, and do anything you dreamed of doing? It was probably akin to what a truly talented young musician feels when he sits down at his instrument and recognizes it as a vehicle for self-expression. A really good pianist, for instance, is limited only by his imagination – the 88 keys are a fantastic playground for him to explore. When there’s no ceiling to what you can do, the urge to play, and play, and never stop, has got to be irresistible.

Piano rocker John Paciga is young – he’s 16 years old – and only beginning to realize the full extent of his expressive powers. But anybody who has ever heard him perform has come away with a full impression of his remarkable gifts. Like his role model Billy Joel, or Elton John, or Andrew McMahon, he’s the kind of pianist whose playing is sensitive enough to pull audiences close during a ballad, dexterous enough to dazzle during his solo passages, and forceful enough to compete with a full band. Paciga has also proven himself to be a skilled songwriter with an ear for a sing-along hook and a knack for an honest, engaging lyric. This West Jersey artist has everything it takes to make a powerful impression: musical ambition, instrumental skill, a crisp, clear voice and a fresh face, and complete dedication to his craft.

“Tickling The Ivories,” the lead single from his Gotta Play EP, is, superficially, a love song to the act of playing the piano – Paciga tells his listeners that he’d rather stay in the studio and make music than go out and party, and he sounds so excited about it that it’s impossible not to take his boast seriously. But beyond that, it’s a song about transcending limitations, and the sheer joy of being young and talented and capable of communicating to audiences through the power of original music. Matching the sentiment, “Ivories” is a passionate, upbeat rocker with an expansive chorus – and a few sections that allow Paciga to showcase his formidable chops. He’s matched the song with a clip that captures him on the streets of New York City on a beautiful day. He walks through Times Square and smiles as he sings; later, he stands on the footpath of the Brooklyn Bridge with his arms outstretched, taking it all in and prepared for whatever comes next.

Please let us know what you need from us to get this video into your programming, and we’ll be sure to make it happen! Please contact Andy Gesner and the HIP Video Promo team at (732)-613-1779, email us at info@HIPVideoPromo.com. You can also visit www.JohnPaciga.com for more info on John Paciga.