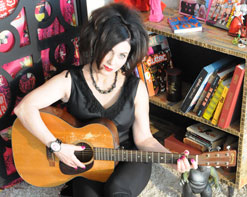 Hello fellow programming folk, it’s Andy Gesner and the HIP Video Promo crew here to bring you the latest video from an 80s new wave legend and cult favorite – Josie Cotton! Cotton sang the now immortal hit “Johnny Are You Queer,” a huge hit that generated significant controversy upon its release; it was banned in Amsterdam, protested by the religious right, even met with mixed reactions in the LBGT community. But through it all the song has continued to be considered a true classic, living on through features in both cult classics likeValley Girl and recent films Jackass Number Two, as well as on the CD compilation A Date With John Waters. You may know Waters as the king of the transgressive cult films, delivering such favorites asFemale Trouble, Hairspray, Cry-Baby and Serial Mom. One of America’s most watched television shows, Glee, has just featured Cotton’s cult classic as well, reigniting the spark for this vigorous tune once again! The entire buzz arrives just in time for Josie Cotton’s brand new irresistibly spectacular clip for “See The New Hong Kong.”

The song addresses the aftermath of a relationship but cleverly hints at the way sociopaths imitate human emotions within the song’s chorus. “He only knew the words but never knew the song” is a line of poetic comparison to the process of hijacking response reactions without ever understanding the feeling behind them, as well as the instantly catchy vocal melody of the chorus. This song is especially powerful and relevant today, as humanity faces the constant pressure to compete and become ultra-productive, leaving no room for emotional response and inefficiency. Josie Cotton, being a veteran songstress and hit maker, delivers her message embodied in a flawlessly crafted pop/rock song that is contemporary and timeless simultaneously, featuring precisely orchestrated synthesizer’s fluttering alongside haunting guitars. From the very first listen, it’s safe to say Josie’s ability to mix pop and message is on par with the master of such craft – U2.

The video pays homage to Asian culture, featuring dancers in culturally appropriate costume with spinning fans and umbrellas, various Chinese character slogans, and even the mighty Godzilla, who joyously ravages a helpless metropolis. Josie is found sporting various oriental outfits throughout the clip, while a handsome young Hong Kong gentleman embodies the cruel end to a love affair. There is plenty to see in this splendid video production, leaving new goodies to find with every view.

“See The New Hong Kong” is the fresh single from Josie’s brand new record Pussycat Babylon, which debuted at #44 on the Billboard Dance Chart. Josie has also appeared in numerous press outlets in the last few months to promote the release including: Entertainment Weekly, Frontiers Magazine, LA Talk Radio, The Sheena Metal Experience, Revenge Of The 80’s,Splash Magazine, Outlooks, David Magazine and many more. The heat for this record is boiling up, and with Josie’s recentGlee feature, it’s sure to become an attention grabber.

Join us in exposing this fantastic song and video from an artist that needs no introduction. We have some copies here of Josie Cotton’s Pussycat Babylon album, so be sure to reach out quick to grab hold of it for giveaways and contests! If you need more info, call Andy Gesner at 732-613-1779 or e-mail us at info@HIPVideoPromo.com.

For info about Josie Cotton’s previous video, “Maneaters (Get Off The Road)” click HERE