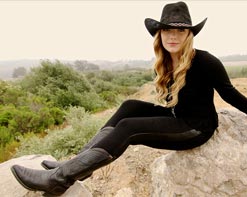 Contemporary country music artists seem to fall into that same old category of pop and country. However, with artist on the rise Kailey Swanson, this is not the case. Join HIP Video Promo as we happily introduce her raw and outlandish clip “Country Love Song” that blends love, country, and just the right amount of romance.

Born in Las Vegas, Kailey began her artistic endeavors with acting in theater at the mere age of nine in the American Girl Revue at the Los Angeles American Girl Store. Although she was young, it had been clear to Kailey that performing on stage was her destiny. In order to fulfill the dream, she continued performing throughout Southern California in various theater productions. Her creative and strong personality landed her various roles in the entertainment industry, including parts in film, television, voice-overs, commercials, and as a successful recording artist.

This jack-of-all-trades can be seen on the Disney Channel series Kickin’ It and her voice can be heard as two characters on the animated show Special Agent Oso, as well as on ABC‘s Mixology playing Dawn. Above all, Kailey has always enjoyed playing the guitar and writing music. Her own, original songs have gained her a large amount of recognition on the contemporary music scene, and her eclectic style is no match for her equals. “Country Love Song” is a must-see clip that offers Kailey’s raw style and energetic demeanor.

Rockerrazzi Films presents Kailey Swanson’s latest clip and single “Country Love Song.” Produced and directed by fellow HIP Video Promo client Jared Sagal, the video acts as a type of mini-film. Laced with an abundance of storytelling and strong performance techniques, the clip follows a tale of love through the act of struggle. Just when you thought Miss Swanson was your perfect girl next door, you see her throwing down cards in a poker game with the boys! The single includes a contagious clap performed by yours truly and makes for a spellbinding ride.

Filled with adventure and romance, “Country Love Song” is this year’s most organically raw country music video. For more information on this exciting new artist, please contact Andy Gesner and the HIP Video Promo staff at (732)-613-1779 or email us at info@HIPVideoPromo.com . You can also visit www.KaileySwanson.com/ for more info.