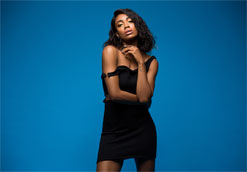 If you’re a fan of adventurous, ambitious, visually provocative music videos, you surely recall MAAD’s gritty, immediate clip for “90s Love”. Released in 2016 off of the EP LÉ FUNK, the “90s Love” video, which featured eye-catching footage romantic couples of all sorts, immediately established MAAD as an inspirational force and a new voice to follow. Originally from New Jersey and now based in Los Angeles, the artist had already distinguished herself as a singer/songwriter, DJ, and a fashion model; “90s Love” made it clear that she was also a formidable singer of high-sheen, state-of-the-art R&B. Naturally for a woman so comfortable in front of the camera, she dominates the “90s Love” clip, effortlessly imparting glamour and confidence to every frame that she graces.

MAAD made the clip with Paulo Berberan, an audacious London-based filmmaker who splits time between music videos, narrative film, and documentary-style reporting on social issues (“A Safe Place”, a shattering piece of visual storytelling, investigated the lives of gay men living in repressive societies). For “New Religion”, MAAD has joined forces with Berberan again – and they’ve made another unforgettable work. The sensuality of Berberan’s cinematography is a perfect match for MAAD’s steamy pop-R&B; together, they’ve created one of those rare videos where every moment demands and rewards close engagement.

Of course, MAAD makes Berberan’s job easy. In a short time, she’s become a master of club-flavored pop music: the sort that’s liable to conjure pleasurable hallucinations in listeners. “New Religion” was produced by the Grammy-nominated GRADES, who has also worked with NAO, Khalid, and Dua Lipa, and he’s fitted MAAD with a sleek, synth-drenched track that amplifies both her mystique and her knack for catchy melody. It’s the latest in a line of noteworthy singles from the singer, and it’ll be including on her new EP (expect that later this summer). She’s been seen in spreads for Vogue, i-D, Wonderland, EBONY, ESSENCE, Cosmopolitan, and Seventeen, and she’s already earned praise from MTV UK (“MAAD is well on her way to catapulting to the forefront on the music scene”), The 405 (“she’s a pop renaissance girl”), Noisey (“soaring pop-funk”), among others, all of whom call her rise inevitable.

For the “New Religion” clip, MAAD, Paulo Berberan, and a handsome co-star have taken to the deep desert. Something has gone terribly wrong – possibly an earth-shaking apocalyptic disaster – and they’re stranded in a place that’s falling to pieces around them. Yet there’s a sense that they don’t exactly mind the solitude, and when a rescue helicopter attempts to contact them, they don’t answer. They’re betting that a dance at the end of the world might appeal to you, too, and when MAAD makes it seem as sexy as she does here, it’s hard to deny its allure.

Here at HIP, we’re elated to be teaming up with MAAD to promote the video for “New Religion”. We’d love to see you add it to your beloved programming! Rest assured we’ll have plenty of MAAD merch available to set up online / on-air contests and giveaways throughout the campaign so please don’t hesitate to get in touch. Please feel free to contact Andy Gesner and the HIP Video Promo team at (732)-613-1779 or email us at info@HIPVideoPromo.com. You can also check out www.ShesMAAD.com for more info on MAAD.