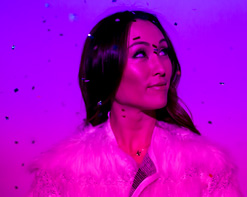 We’ve brought you some amazing music from Los Angeles based singer/songwriter and muse, MALEA. We are very eager to present to you her latest offering, “You’ll Never Fix My Heart.” She is known for her 2014 single “Give,” which reached the Billboard Top 20 Dance Club Songs chart in 2014. Following “Give,” MALEA released the chart topping single, “One Hot Mess” which she wrote with Francci Richard, produced by Kizzo, and remixed by Grammy winner Dave Aude. “One Hot Mess” put MALEA at Number One on the Billboard Electronic Dance chart where she remained on the Billboard charts for ten straight weeks.

This video is an excellent platform to showcase this track because it captures a very relatable mood that a diverse set of audiences would instantly connect to. Taking a step back from the typical charged, eclectic, imaginative nature of her last few videos, the video for “You’ll Never Fix My Heart” reflects the acoustic nature of the song with a simple, honest, raw video that will move all who watch.

Malea has a background on Broadway and Classically trained, she captures a universal audience with spiritual and transcendental tones. She writes from the heart and incorporates electro-pop temperaments that conjure emotion in the listener. Billboard Magazine recognized Malea’s global work on and off the stage, helping Animal Rights and Animal Foundations with awareness. Blending this with her love of yoga and astrology, she is to be found on all social media platforms inspiring change while supporting a wide array of artist communities.”

We’re once again thrilled to be teaming up with MALEA, and we’re here to do whatever we can to support her and the new “You’ll Never Fix My Heart” music video. For more information please contact Andy Gesner and the HIP Video Promo team at (732)-613-1779 or email us at info@HIPVideoPromo.com. You can also visit www.Malea.com for more info on MALEA.

For info about other MALEA music videos, click HERE