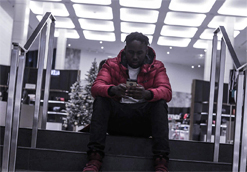 Michael Bright burns through contemporary R&B with a fiery passion. A natural trailblazer, his soulful sound and sultry voice create something that is uniquely his. He molds his pain into songs with true emotions and lyrics that capture audiences. With his intense pressure and heat, not only in his bars but in his heart, his love for music grows stronger every day.

Aged 19, Michael Bright is a Toronto native and was raised in Brampton. By the age of 7 he was already deeply entrenched in the world of hip-hop, pop, and R&B. He has studied the greats – Chris Brown, Usher, Michael Jackson – and is now determined to become greater. Since then he has performed at talent shows, The Rose Theatre, Bramalea City Centre, and many high school performances. He now attends Sheridan College as a sophomore but he dedicates most of his time to creating and cultivating music. He produces music in his small studio where he developed his sound, and is currently working on new singles set to come out next year. When he was 18, he released some experimental tracks including “Your Mind” and “Wet” featuring Arhinslim. His first music video, “Heartache,” captures the pain of heartbreak with a slow tempo as his memory of his former lover’s bright personality slips away, but not in silence.

The video for “Heartache” opens up with an all-seeing eye as we shift into the viewpoint of Michael Bright. Directed by Motion Beaver, the video is painted over a city landscape with flashing green and pink light. With the contrast of the changing background, one can sense the changing seasons. The feelings fade just like the weather and he calls back to a time and place where things were less cold. As the frame shoots to his old flame, he demands answers that will never explain the pain away. Without closure, “Heartache” brings people together in a time of distress to prove once again that music is the universal language of love that can’t be taken away.

We’re honored to be working with Michael Bright, and we hope you embrace the new clip for “Heartache.” We’d love to see this video added to your cherished programming and online presentations! For more information on Michael Bright please contact Andy Gesner and the HIP Video Promo team at (732)-613-1779 or email us at info@HIPVideoPromo.com. You can also check out instagram.com/michaelbright_/ for recent updates on this contemporary R&B trailblazer.