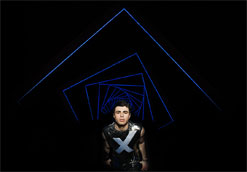 Transforming the outlandish concepts inside his brain into fully realized productions using a laptop and microphone, multi-talented vocalist, songwriter and producer MkX is quickly emerging as a fresh, innovative pop trendsetter. Juxtaposing electronica, hip-hop, future bass and trap production with dynamic and infectious songwriting, the Boston based artist is building an intense buzz via the three singles he’s dropped since late summer 2017.

His sultry pop/r&b debut track “The Look” currently has over 500,000 streams on Spotify, and its equally infectious follow-up “Ghost” – released the weekend before Halloween – is quickly closing in on 500,000. In November, he performed them as the featured artist at the Las Vegas Fashion Show Mall’s live fashion show. His latest drop is the seductive, slow burning trap-pop anthem “One Sided Love” – a song he wrote about the emotional rollercoaster of being immersed in unrequited love. He pleads, “Slam the brakes, so my heart don’t break…” Yet only hope is to “play hard to get to be your lover/thought I was close but I overshot…”

“I wanted to write a song that reflected what I was going through and that I know everyone who listens has gone through at one point or another,” says MkX, who is currently studying electronic production and sound design at the famed Berklee College of Music. “I’m really into creating records that have a unique level of detail and cleverness in the wordplay, but keep them a bit vague so that everyone can connect with them on a personal level. As a longtime pop super fan myself, I know how important it is as a listener to be able to connect with what the artist is saying. Lyrically, the song is like an inner-monologue of overanalyzing and being a bit paranoid. It’s a balance between something that’s not the most fun thing people deal with in everyday life, and an anthem quality that makes it engaging, like hey, we’re all going through this so we can vibe on it together.”

MkX’s music is the foundation and driving force of an overall branding vision that includes a unique and eye-catching fashion style he describes as “very city meets 80s futuristic meets 90s throwback. I love incorporating my love for technology into my clothes and into the show. I created all of the video backdrops that play behind me during the show. Each song that I write has a visual concept and aesthetic that goes hand in hand with the track. I digitally replicate this as a video backdrop to give audience a glimpse of what goes on in my brain during my creative experience.”

Before emerging as a solo artist, MkX was on tour opening for Ariana Grande after hitting the road in the past with Christina Perri. A popular live performer since the age of 9, he laid the foundation for his current releases with over 300 shows nationwide, many as an opening act for Top 40 artists. The venues he’s played include the Whisky A Go Go and The Roxy in West Hollywood, CMJ Music Festival, El Rey Theatre in Los Angeles, Times Square and Lincoln Center in New York City, and House of Blues and Hard Rock cafes nationwide. MkX has built a strong following in Las Vegas by performing at Mandalay Bay, and he was also on the production crew of Britney Spears’ Vegas residency, apprenticing under the musical director.

MkX is dropping his latest track “One Sided Love” this Summer. The track was written and produced by Mkx who eventually teamed up with DJ Mike D (Adele, Beyonce, Ariana Grande) for a remix of the track. The video was shot by award winning director Matt Alonso (Pitbul, Odd Future, The Game, Justin Timberlake) and will be releasing this Summer as well.

Some artists who have the sense they’re born to make music can pinpoint a moment in their early childhood where their sensibilities first formed and the dream took hold. MkX prefers to tell people that he’s been at it since he “popped out of the womb. My parents would always tell people that their child was possessed with music.” At age three, he remembers writing his first songs on a Fisher-Price tape recorder and toy beat machine. A few years later, he asked his parents for a guitar, and everything blossomed from there. While crediting them with being happily supportive of his talent, passion and drive, he’s also indebted to the formative influence of his favorite artists past and present, including Avril Lavigne (“a badass that spoke her truth with an edgy attitude”), Shakira (whose penchant for putting out multiple remixes of her hit singles “fascinated me from a production standpoint at age four”), and Lady GaGa, who “has such a fantastic creative eye and 360 concept for her artistic visions, which I think is such an important part of being a great artist.”

Growing up, MkX was fascinated with Top 40 radio ever since he was around 2 or 3. “I always had an ear and eye for what was ‘next’ and loved staying ahead of the trends in pop music. I love paying homage to 2000s pop songwriting and production because it’s not only what I grew up listening to, but it also taught me a lot about the craft of production and songwriting. One of the reasons I love writing pop music so much is that it’s art with almost a science to it. It’s a very dynamic balance of catchiness and following a certain form, while making it unique and stand out from what’s already been done.”

Music is not only his form of self-expression, but a method of healing that has helped him through personal obstacles. Between his success as a young performer and his breakout as MkX, the artist went through a lengthy stretch where he felt his identity disappeared due to the ridicule and judgement towards him. It was a painful time of lost confidence as he became a shell of his true self. Drawing on the multitude of talents he cultivated as a kid, his self re-branding as MkX and development of a sound and style all his own has now, happily and defiantly, taken him to the brink of stardom and cultural influence on his own terms.

“The ‘X’ in my name represents self-expression through art,” the singer adds. “I used to be very self-conscious of what people thought of me. It affected how I acted, wrote music, and lived my life. I decided to create a character that embodied everything I wanted to be as a person. From auditory/visual art and fashion to attitude and confidence, I developed a persona that represented the best version of myself. After a lot of work and self-discovery, I eventually became the person that I wanted to be. I want people to use my music to bring out their inner confidence. I want my music to change the way people carry themselves. I want them to feel like a badass as they walk down the street with my song playing through their headphones. I want to make people the best them they can be with my art.”