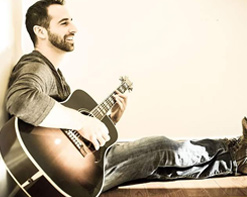 My Silent Bravery, a.k.a., the one-man musical powerhouse Matt Wade, “Drunk Off the Sun” video premiered on AXS.com just as the height of the summer season gets underway. The video has become top #1 trending video in Brazil which this year will host the 2016 Olympics in Rio De Janiero. Powered by a feel-good vibe, reggae pulse, and infectious melody, “Drunk Off the Sun” has all the makings of a summer anthem. With uplifting sing-along lyrics like, “Drunk off the sun/Soaking up the summer fun/Finally found a way to keep refilling our cups,” the tune and accompanying music video are overflowing with the positivity and inspiring tone of all of My Silent Bravery’s signature work.

“A silver lining runs through this record and a lot of my music,” explains the Worcester, Massachusetts-bred Matt Wade, adding “that’s intentional. When I go out to play shows, it’s not about me. It’s about the audience. That’s what I want listeners to walk away with. I hope they’ll feel more uplifted than when they came.”

“A lot of time we look at the world like, ‘What’s in it for me?’ as opposed to, ‘what can I give back to it? That really changed for me,” says Wade.

My Silent Bravery is having a great 2016 as “Drunk Off the Sun” follows the viral success of his cover of Nelly’s smash hit, “Ride With Me,” which trended on YouTube this spring overseas. It’s another sign of his ever-growing fan base, which now has more than 100,000 social media followers and has reached 2.5 million YouTube views. The artist was also recently nominated for Best Pop Act at the Worcester Music Awards, was chosen as a finalist in the 12th Annual International Acoustic Music Awards, and toured with pop star Aaron Carter and American Idol winner Lee DeWyze earlier this year.

Look for My Silent Bravery to make upcoming guest appearances on the nationally syndicated radio program, Art of The Song, the popular Voice of America radio show, Border Crossings and the UK-based, cutting edge pod cast, Bridge the Atlantic, with more special media appearances to be announced shortly. Call Andy Gesner and the HIP Video Promo team at (732)-613-1779, email info@HIPVideoPromo.com . You can also visit http://www.MySilentBravery.com for more info.