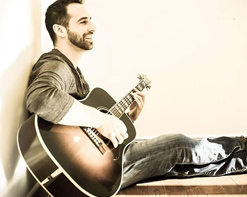 Not long ago we hooked you up with My Silent Bravery’s “Drunk Off The Sun” video. This playful clip was the soundtrack to the summer with an unmistakable energy. As the weather slowly begins to change, we’re excited to bring you another ambitious video from Matt Wade. “Warning Signs” is every bit as captivating as we’ve come to expect from My Silent Bravery, but also treks into new territory.

From his hometown of Worcester, Massachusetts, Wade has been connecting with his legion of fans both through his one-of-a-kind live show and also through his prolific release schedule. The newest addition to his catalog is star-studded new album, Breakthrough. Enlisting an all-star array of producers including Grammy® Award-winner Mike Mangini (Joss Stone, David Byrne, Smash Mouth), Peter Zizzo (Avril Levine, Jennifer Lopez, Jason Mraz), and Anthony Resta (Elton John, Collective Soul, Guster), My Silent Bravery pulled out all of the stops this time around.

As an artist who has made a big name for himself by making videos that are fun-loving, emotionally engaging, and positive videos, the “Warning Signs” video is a different course of action for My Silent Bravery. The video begins with Matt in bed, eyes closed, looking exhausted. The story of how he got there begins to unfold…entirely in reverse. Working backwards, a story emerges of an ugly blow out where lines are crossed and relationships are ended. Stick with this all the way to the end, because Wade and director Vassili Shields have put together a clever, unexpected beginning (or should we say ending?) to this exceptional clip.

For those viewers with an artistic and cinematic eye, pay extra attention to Matt’s vocal performance. Since the video was shot in reverse, it was his duty to learn how to sing his own song backwards! This is no small feat, and when it is played back the final product is incredibly effective. It’s so well done that we’re willing to bet an untrained eye won’t even notice.

Here at HIP Video Promo we’ve been singing the praises of My Silent Bravery for quite some time and just when we think we’ve seen the best, our expectations are shattered every time. Don’t just take our word for it, do yourselves a favor and check out the new “Warning Signs” video, listen to Breakthrough, and get this video right into your programming! Please contact Andy Gesner and the HIP Video Promo team at (732)-613-1779, email us at info@HIPVideoPromo.com . You can also visit www.MySilentBravery.com for more info on My Silent Bravery.