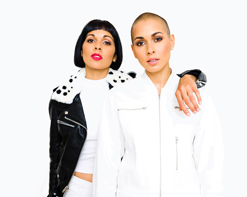 New York City-based identical twins Nicole and Natalie Albino, collectively known as Nina Sky, have been performing around the world since their teens when the chart topping first single “Move Ya Body” was released. The duo followed that success with Billboard-charting club anthems “Turning Me On,” and “Oye Mi Canto.” They’ve continued to stay busy with A-list collaborations with Grammy Award-winning artists and producers including Bruno Mars, Diplo, Major Lazer, Rick Ross, Betty Wright, Aventura, Sean Paul, and Pitbull.

Their most recent collaboration is the international club anthem from Troyboi & Diplo “After Hours” which currently has over 10 million views on Youtube. Their progression artistically is evident not only sonically but is displayed in their ever-changing sense of style which has developed them into fashion icons both on the New York City scene and in pages of fashion magazines.

The newly released official video for their addictive summer tune “Champion Lover” (Tommy Boy) was filmed in New York City by Ariel Fisher and Austin Kerns. The truly diverse depiction of summer lovin’ earns perfect 10s for its playful vibes and celebration of love. The video features intimate moments between lovers, friends and families. As the twins explain: “We wanted to use our platform to make sure that all love was represented, because a real champion lover encompasses true love and all of its diversity.”

Here at HIP Video Promo, we’ve had Nina Sky on our radar for some time now and are so wildly excited to finally have the chance to work together with them and Tommy Boy Entertainment to bring “Champion Lover” to viewers far and wide. We would jump at the chance to do anything we can to get this video into your programming, so please don’t hesitate to get in touch! Please contact Andy Gesner and the HIP Video Promo team at (732)-613-1779, or email info@HIPVideoPromo.com. You can also visit www.TommyBoy.com for more info on Nina Sky.