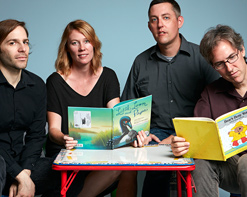 Bowie, Elton John, and the Jefferson Airplane all sang memorably about extraterrestrial journeys. Belle & Sebastian dreamed vividly of a rocketship ride, Janelle Monae rode the funk to other spheres, and Pink Floyd set the controls for the heart of the sun. Add George Pasles of indiepop group overlord to the list of songwriters fascinated by science-fiction and space travel. On “Mission To Mars,” the first single from The Well-Tempered Overlord, Pasles uses an ill-fated trip to the red planet as a metaphor for romantic alienation and the limits and dangers of human ambition. And just in case the artist’s message gets occluded — even temporarily — by the catchy melody and a chorus indebted to ’60s psychedelic pop, Pasles has paired “Mission To Mars” with a mesmerizing clip that makes manifest the anxiety and exhilaration of life in a space capsule.

overlord is a proudly independent band, and Pasles had a tight bankroll commensurate with his status as an indie artist. His flight to the stratosphere and beyond had to be shot on a shoestring budget. The songwriter and director spent hours in his childhood home in rural Pennsylvania crafting props and sets that create the illusion of newsreel footage from the dawn of the space race. overlord’s songs are known for meticulous attention to sonic detail; likewise, every shot in Pasles’s homemade clip for “Mission To Mars” is crammed with meaningful content. Not every modern video invites repeat viewings; “Mission To Mars” practically demands them.

overlord has been a closely-guarded secret among fans of indiepop for many years, yet the band received nothing but positive notice for the 2013 album In Soviet Russia, My Heart Breaks You. Pasles recruited his collaborators from the ranks of NYC critical favorites: drummer Matt Houser and bassist Sarah Brockett both play in beloved Brooklyn indiepop band Palomar. Analog synth player Tris McCall, whose array of spaceship-on-the-fritz blips and nuclear-meltdown noises make him an ideal musician for a song about an interstellar mission gone awry, has played with My Teenage Stride, the Consultants, and Kapow! Mixed by Travis Harrison of Serious Business Records (who has also produced albums by MiniBoone and Higgins, among many others), The Well-Tempered Overlord is ten tracks of smart, tuneful, innovative pop-rock that takes inspiration from new wave, psychedelia, ’60s bubblegum music, and plenty of weird fiction, too.

George Pasles is an expert on comic books of the Cold War era, and he’s drawn on that knowledge in his first foray into video direction. He’s taken pains to ground the viewer of the “Mission To Mars” clip in a specific historical moment: the homemade machinery he’s assembled for the video really is redolent of both the Apollo missions and old Superman stories. He’s gotten ace performances from his actors, too, at least a few of whom have been involved in overlord. Here, they don’t look like the East Coast indiepop musicians they are — they dress and behave like cheerful, slightly uptight scientists in a cramped command center. As for the astronaut, we’re shown how his childhood dream becomes grown-up peril. Though he’s doomed from the very start, his is a trip worth taking.

If you would like more info on overlord or would like to add “Mission To Mars” to your programming please get in touch with us here at HIP Video Promo and we’ll hook you up! Feel free to call Andy Gesner and the staff at (732)-613-1779, or email info@HIPVideoPromo.com. You can also visit www.Facebook.com/OverlordUSA or www.StormTowerRecords.com for more info on overlord.