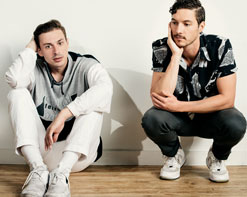 Bands are often internally referred to as marriages or relationships unto themselves. In the case of Painted Palms, they began as what could be considered a long distance relationship. Originally based in Louisiana and San Francisco, the pair wrote and recorded their songs completely digitally. And though they would soon be in the same city, the kinship was never in question because before they were a band they were cousins. Their years growing up together assured that whether near or fear they would speak the same musical language.

The sound of Painted Palms is one that is rooted in indie rock songwriting principles but executed with a decidedly new wave and electronic feeling. The simple nature of the songs is embellished and filled out with layers of experimental sounds that are never fighting for space with the primary melodies, but rather co-existing to paint a complete picture.

They’ve embraced the electro musical approach harkening back to 80’s new wave, and with the new “Refractor” video they also make perfect use of a visual near and dear to that magical decade. The basis of the video involves a sinister pair patrolling the streets of Los Angeles at night, menacingly seeking out the target of a premeditated retaliation. Hints of neon creep into frame, following along the contours of the figures in the car, giving a Tron feel to the video.

Once they find their target the video cleverly switches to a full animation presentation in the style of old indie comics and Japanese action. It serves a dual purpose, not just for the killer visual, but it also masks the true nature of their actions. Once the deed is done, the video switches back to live action, but like a reminder of their sins, the neon stays with them.

We know you loved the last Painted Palms video for “Forever,” and we’re confident you will jump on “Refractor” just the same! For more information on Painted Palms, please contact Andy Gesner at (732) 613-1779, or e-mail the HIP Video Promo staff at info@HIPVideoPromo.com . You can also visit  or http://www.PolyvinylRecords.com/ for more info.