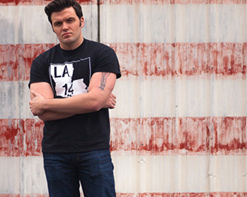 It is the mark of great artists to build on past work rather than cover old ground. This is true of Rod Melancon and his upcoming five-song EP, LA 14, for the fledgling innovative label, Blue Élan Records. The first example we brought you of was the gritty “Perry” video, which brought the sound of his Louisianan home to life. Today, we’re proud to bring you “Lights of Carencro,” which blend Rod’s signature combination of alt-country and blues-rock with a visual that leaves no doubt that within the parish lines, things are done a little bit differently.

Told from the perspective of his own father, “Lights of Carencro” is a fiery autobiographical tale of love, loss, and an unapologetic dose of bayou justice. “The song is inspired by the death of my namesake and the events that followed. He was my uncle,” says Rod. He furiously free forms the tale of the accident that claimed his uncles’s life and the ensuing grief, rage, and ultimately, revenge in the aftermath while he and the band are literally locked in a tiny cage.

A collage of black and white photos of his deceased brother and the grieving family attempting to go about their lives are mixed in, along with a solemn funeral procession through the woods. The only thing distracting Rod from his caged anger is the sight of a lone figure walking in the distance that bears a striking resemblance to the brother he lost. It’s not a video with a happy ending, rather, it is one that paints a brutally honest picture of how tragedy lives on for a very long time.

We knew Rod was the real deal from the minute we heard “Perry,” but with “Lights of Carencro” he delivers something even more devastatingly beautiful. Few artists open their souls like this, and we’re very excited to share this fiendishly fantastic video with you and your viewers. You can hit up Andy Gesner and the HIP Video Promo team at (732)-613-1779 or email us at info@HIPVideoPromo.com . You can also visit http://www.RodMelancon.com/ or http://www.BlueElan.com/ for more info on Rod Melancon.

For info about other Rod Melancon music videos, click HERE