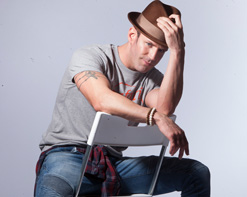 From the first stutter of the bass synthesizer, you’re drawn in. Ryan Brahms is dealing something powerful – something seductive, mysterious, and mesmerizing – and he’s determined to give the world a taste. “Love Dealer,” the latest single from the exuberant New York City singer-songwriter, is hummable, danceable, irresistible: it’s a grown-up pop song for adults who haven’t forgotten what it feels like to fall under the sweet enchantment of a groove.

This “Dealer” has all the elements in place, including a propulsive beat, twinkling piano, scratchy Chic-like funk guitar, gossamer backing vocals, intimate whispers, and a charismatic performance from Brahms, who has never sung with any more urgency than he does here. And while it could be said that the track completes his transformation from piano balladeer to modern pop singer, the songwriting sophistication and poise for which he’s known is still there – it’s just been presented in a glossier, tastier package.

Now he’s got a video to match the carefree tenor of his new sound. The “Love Dealer” clip is glamorous and sexy, dangerous and intriguing, at once exotic and playfully familiar. Director David Montoya takes Ryan Brahms to Cartagena, Colombia – a coastal city of gorgeous colonial architecture, South Caribbean waves, and some beautiful bodies as well. Brahms plays a stranger in town, but one with the best of intentions; he doesn’t mean to pinch the winsome blonde girlfriend of a local heavy, but with moves as smooth as his, it’s inevitable. The chemistry between Brahms and his female lead is undeniable, and when they finally do get down, Montoya steams up the screen with some tastefully provocative shots of the two principals in action.

The rest of the video is dazzling to watch, too. Cartagena is one of the most picturesque cities in South America, and Montoya isn’t shy about showing it off. His camera soars above the sleek skyscrapers of the Downtown and lingers on the alleys and plazas of the Walled City. The northern Colombia cultural capital was one of the first settlements in the New World, and much of that history is still inscribed on the stones and structures. The pastel paint and wooden and wrought-iron balconies of the Walled City are stars of the “Love Dealer” video, too, and their beauty contributes to the intoxicating atmosphere. When Brahms and his girl flirt in front of a block-long South American wall mural, the excitement is palpable: for each other, for the tropics, and for pop music.

Ryan Brahms delivers once again and we’re thrilled to be a part of the team! We are here to do whatever we can to get this video into your programming, so please don’t hesitate to get in touch with us. Please contact Andy Gesner and the HIP Video Promo crew at (732)-613-1779 or email us at info@HIPVideoPromo.com or visit www.RyanBrahms.com for more info on Ryan Brahms.