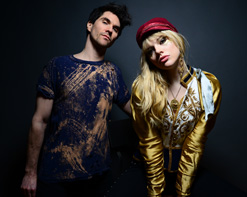 The story of Scarlet Sails begins with one massive leap of faith by Russian-born singer Olya Viglione. At the age of 21, she left the motherland with the American dream on her mind and The Big Apple in her sights. She found herself in the eclectic scene of the Lower East side, playing keyboard and touring with Jesse Malin where she shared the stage with the likes of Urge Overkill, Clem Burke of Blondie, and Wayne Kramer. But one night on the Bowery, she met Brian Viglione; an encounter that would change both of their lives forever.

Up until this moment, Brian had been known as the drummer and founding member of legendary Boston “Brechtian Punk-Cabaret” outfit, The Dresden Dolls. The Dolls’ career saw them touring theater circuits around the world in the company of Nine Inch Nails, Cyndi Lauper, and Panic! At The Disco, as well as releasing three studio albums, a live album, and two concert DVDs with Roadrunner Records. Since The Dresden Dolls, the Boston native has worked on numerous collaborations including joining legendary punk band Violent Femmes and performing drums on Nine Inch Nails’ sixth album Ghosts I-IV.

Brian was the catalyst Olya needed to bring her songs to life, and with the addition of guitarist Mark Kohut and bassist Kevin Jones, Scarlet Sails were born. The band’s name pays homage to the classic 1923 adventure novel by Alexander Grin, which tells the tale of a young girl who dreams of a prince sailing in under scarlet sails to take her away, and shines in explaining how it is in our power to make little miracles happen.  It’s a story about dreams coming true even in the most unlikely of circumstances. The book was a childhood favorite of Olya’s, and reminded her of the Russian saying that goes “the how you name your ship, is how it shall sail…” When it was time to set her own course with her music, it was the perfect choice for her new project.

Armed with sage wisdom and unhinged tenacity, the band’s sound is both lustful and raucous while showcasing the kind of masterful songwriting only the most experienced artists can manifest.

In the spring of 2017, the band released their debut album Future From The Past and supported the record with three national tours as well as a New Year’s Eve performance in Moscow. Their new song “Hideaway” comes as the first installment in a series of singles produced by Ben Rice, set for release throughout 2018. The music video for “Hideaway” serves as the perfect visual representation of Scarlet Sails’ artistic- and at times theatrical- style. Following Olya in search of her “Hideaway” through a Victorian-era house, she ultimately finds that what she’s looking for has been right there all along.

Here at HIP Video Promo we’re profoundly thrilled to share the raw passion and artistry of Scarlet Sails to bring you the “Hideaway” music video. It’s our sincere hope that you and your viewers will flock to “Hideaway”, share it on your socials, and add it to your programming in a timely fashion. Rest assured we will have plenty of outstanding Scarlet Sails merch to set up online/on-air contests and giveaways throughout the campaign. Don’t hesitate to let us know what we can do to help you spread the musical and visual magic of Scarlet Sails like a wildfire. Please contact Andy Gesner and the HIP Video Promo team at (732)-613-1779, email us at info@HIPVideoPromo.com for more info on Scarlet Sails.