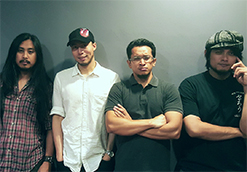 Shadow Puppet Theatre allows music to encapsulate their senses, producing songs that are totally authentic. Their rock, pop, and alternative sounds are raw yet refined without being overproduced. They let the beat move through their bodies with great bass-playing, passionate drumming and effective guitar-work. Their willingness to experiment musically ascends from their comfort and talent as they push themselves onto another level of consciousness of what it means to create.

Growing up in Kuala Lumpur, Malaysia, these four trained musicians found each other on a path no one dares to walk on. In a world school in the middle of an oil palm estate, a young boy Dzul (vocals) met virtuoso Chip (bass). Meanwhile, Chris (drums) sought formal training at an academy of arts; many years later these musical soulmates crossed paths and added Yazzer (guitarist) into the mix. In 2016 their visions came together to release their first single, “Insomnified” and their EP Nightvision. In 2018 they released their debut full-length album, John Doe. With their talents coming together as a team, they lift the whole unit to a totally outstanding level. Charisma and the absence of ego allow the music to speak their mind.

Album opener “John Doe” greets us with a live musical performance that highlights their finely-tuned skill set and an ear for a great hook. The song touches on discrimination and stereotyping to the marginalized, unknown or intentionally concealed John Does of the world. With more masks and masquerades, their second single, “Mystery Girl” has the same shock value. Directed by Amen Naqib, the video centers around the vocalist trying to win over the affection of a faceless girl. As he walks through the bookstore, pages of their romance begin to unfold in the fairytale section; when the bridge breaks, his memories flow with the chorus. He is then shown in a gallery among sculptures, hinting at that he might have been an enigma himself.

We’re honored to be working with Shadow Puppet Theatre, and we’d love to see the clips for “Mystery Girl” and “John Doe” added to your programming and online presentations! For more information on Shadow Puppet Theatre please contact Andy Gesner and the HIP Video Promo team at (732)-613-1779 or email us at info@HIPVideoPromo.com. You can also check out instagram.com/shadowpuppettheatre/ and facebook.com/ShadowPuppetTheatre for recent updates.