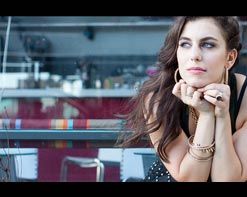 In the arc of a successful pop career most artists will release a plethora of finely polished tunes that are a mix of slick production, top-notch songwriting, and shimmering visuals. Only after they’ve made their mark with radio-ready hits do they feel confident enough in their abilities to release a live performance, or anything that would require them to step out from behind the comfort of a production team.

For Shayna Leigh, her trajectory was exactly the opposite. Late last year we brought you her stunning live performance video of “May Of My Heart.” The video was recorded live with no tricks or or overdubs added in. It’s appropriate that this artist who has also aspired to emulate artists like Bette Midler, Audra McDonald, and Linda Eder was unafraid to put herself out there in this manner.

With the new single “Drive (Back To Where You Lived)” Shayna has dove headfirst into her ability to craft a dynamic pop song. The song is a touching reflection on the comforts of home and how sometimes we have to take a step back to shock ourselves back into gear.

The video for “Drive (Back To Where You Lived)” begins with a young Shayna Leigh onstage at a school talent show. After her introduction she freezes up, and with her family watching, darts offstage, unable to muster up the courage. Fast forward to teenage Shayna and a late night game of spin the bottle. When the bottle lands on her, the fear takes over again and she once again runs back home to the sanctity of her bedroom. It’s in this bedroom that we see her developing the confidence to conquer these fears, as her and her friends pour their souls into her music. We already know the end result of Shayna blowing away audiences with her live performance, but this video is an honest revelation that even the most confident performers have had to overcome their own fears.

We are very pleased to be working with Shayna Leigh once again and would love for you to include this video in all of your programming. Please let us know if there is anything we can do on our end to make that happen. For more information on Shayna Leigh contact Andy Gesner and the HIP Video Promo staff at (732)-613-1779 or email us at info@HIPVideoPromo.com . You can also head to http://www.shaynaleigh.com/ for more info.

For info about other Shayna Leigh’s video, “Map Of My Heart,” click HERE