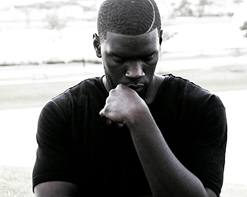 Every once and awhile, an unknown voice leaps from a playlist with complete authority. Shun Ward has a voice like that — and if you don’t know him yet, it’s certain that you will soon. Ward has the kind of voice that stops listeners in their tracks and sends them to the Internet, Googling lyrics, determined to learn more about the singer. When you hear a voice like that, it’s irrelevant whether or not its possessor is a star. You know you’re in the presence of the rarest and precious thing in music: a true storyteller and a powerful communicator of emotion.

Although he’s still in his early twenties, Ward has already built a reputation in his hometown of Houston as a go-to guy for hooks and features. The H-Town hip-hop scene is notoriously competitive, but it’s also one in which excellence is recognized — and Ward’s independently-released USA (Under Shun’s Authority) has established the singer as a regional force. And his fame is spreading fast: Devin The Dude featured Ward on “Rearview,” a standout from his One For The Road album. He’s also attained a dedicated following on the other side of the Atlantic, appearing on records by Joe Nebula and Derek Flynz, as well as an appearance alongside Snoop Dogg and T-Pain on the E Lite track “Wind Up My Heart” as well as alongside Flo Rida on Gold1’s “Dance For Life” – both featured on the Kontor Top Of The Club compilation in Germany.

“Mission” and “So Scared,” his latest releases, are his best and most irresistible recordings yet — and two more examples of Ward’s subtly ambitious songwriting. The beats are slinky, the drum and instrument programming is innovative (check out that digitally-warped hi-hat effect on the “Mission” verse!), the performances are magnetic, the choruses are undeniable, and both are blessed by Ward’s gossamer vocals. His falsetto in “So Scared” feels like a caress, and his powerful lead in “Mission” simultaneously evoke fragility and determination.

The TrillArt-directed clips for “Mission” and “So Scared” perfectly capture the haunted, moody, seductive essence of Shun Ward’s music. In both clips, love and desire are mysterious, overwhelming forces that drive men and women to behave as if they’re in a trance: the bodies are beautiful, the dreams are lucid, the attraction is palpable and the melancholy is heavy, and danger seems to be lurking at the edge of every frame. The footage is often nightclub-dark (naturally), but both clips are impeccably shot — crystal clear, even when they’re foregrounding the confusion of the characters. Ward himself looks every bit a contemporary pop star and love man — he’s equally at home singing to the camera and holding a beautiful woman in his arms.

These two fully realized, wonderfully crafted clips are arriving to you just in time to become the hottest new jams of the summer of 2016. Please don’t hesitate to be in touch if there’s anything we can do on our end to help secure these videos the exposure they deserve in your upcoming programming. Please contact Andy Gesner and the HIP Video Promo team at (732)-613-1779 or email us at info@HIPVideoPromo.com. You can also visit www.D2RManagement.com for more info on Shun Ward.