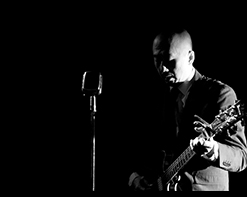 Inspired by the music’s haunting, ethereal quality, NYC-based singer/songwriter Hank Kim decided to release his latest album under the name Silvery Ghosts. The sound of the album–entitled Love & Other Ephemera–was inspired by the principle of creating music without boundaries. The result is a sonically striking LP that blends modern electronic music with traditional acoustic instruments like piano, guitar, and the saz–a long-necked, 7-stringed lute used throughout the regions of Central Asia and the Eastern Mediterranean. HIP Video Promo is pleased to present two clips from this exceptional LP: “At One Arm’s Length” and “Vivid In The Valley.”

The road that led Hank Kim to seductive sounds of Silvery Ghosts, however, was a complicated one. Prior to this album, Kim dealt mainly in the genre of power-pop. But following the completion of his second LP–2008’s Notorious Rainproof Smile–Kim fell into an deep artistic down-cycle and sincerely believed he was through with music once and for all. Subsequently, there was a stint in acting school, a small business venture, and an ill-fated romance that dissolved in dramatic fashion. Nearly a year later in 2010, Kim suddenly felt the urge to create again, and began typing a raw stream-of-consciousness that eventually became the lyrical foundation for Love & Other Ephemera.

In keeping with the album title, Kim and producer Nate Martinez took somewhat of an ephemeral approach to the arrangements, focusing on sounds and instruments that represented truthful expressions of each particular moment, lending the entire affair a unique and unusual energy. Very significantly, the album also features the voice of fellow NYC artist Kelli Scarr who shares lead vocal duties with Kim. Scarr–whose voice has been featured on recordings by Moby and the Roots–brings an emotive and airy timbre to the album that contrasts beautifully with Kim’s rich baritone.

The video for “At One Arm’s Length” is a black and white clip that presents the ghostly duo of Kim on the mic and a dancer performing a fluid modern routine in the background. The lighting is key here, using the black and white contrast to keep the attention solely on Kim and his counterpart. The effect is simple and striking, the movements seamless and deliberate. While many artists attempt to drench their videos with color and too much action to distract from the music, this video keeps the focus on the music, simply lending a compelling visual component to accompany.

“Vivid In The Valley”, which showcases the rich duality of Kim & Scarr vocally, is a much larger production, featuring beautiful cinematography and a mysterious, compelling narrative. At once erotic and dispassionate, in a cabin deep in the woods, a couple work out some emotional issues in various states of undress, as if under a spell. Meanwhile, Kim stands by, unnoticed. Musically, the track simmers and sizzles in a deliciously brooding melancholy, recalling tones of Chris Issak’s classic, “Wicked Game.” “The room is melting, but I feel nothing / I feel nothing, only fear” is sung, sending shivers down your spine. Between the two videos, it’s clear that Kim is onto something extraordinary with his latest offering.

For more information on this artist or either of these two clips, please call Andy Gesner at (732) 613-1779 or contact the HIP Video Staff at info@HIPVideoPromo.com /a>. You can also visit www.SilveryGhosts.com/ for more info.