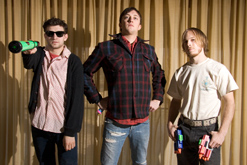 Hello indie rockers! It’s Andy Gesner and the staff from HIP Video Promo, here with the latest from a young band with an unerring sense of melody and arrangement. Missouri-based Someone Still Loves You Boris Yeltsin is one of the most winning acts in the indiepop underground – few groups in any genre inspire such passionate and protective attachment from their fans. Their songs are approachable, engaging, instantly memorable, and hooky without being overly sweet. Yet while SSLYBY melodies and six-string hooks are glorious and upbeat, their favored subject matter is often dark, spiked with intriguing images and literate detours. You’ll remember that we sent you the clip for “Think I Wanna Die”, the first single from Pershing, a few months ago. On the surface, the track is irresistible dayglo Sixties pop: bright, jangly, hummable, wholly irresistible. A closer listen revealed trouble in the works – lines about broken knees and marimbas made of bones, and an undercurrent of destabilizing fatalism. Rarely does a sunny-day pop song possess such reserves of depth and mystery.

It’s a tension that the Midwestern quartet exploits to great artistic effect on their heralded second album. Pershing is full of such contradictions: joyous-sounding singalongs for doomed relationships, magnificent six-string symphonies about (seemingly) commonplace events, rock philosophy wrung out of hard experience. The glittering romance of “Glue Girls” conceals sinister undertones; “Boring Fountain” is one of the most accurate portrayals of ennui ever captured in a pop song. “Modern Mystery”, the standout cut on the collection, might be a tale of a love affair gone wrong, or it might be the story of an indie band running on faith, and crashing into the future without a roadmap. “There is no modern mystery”, sings Phillip Dickey, “we’re making up our history”. You can call them twee – they’ll hardly resist it – but this is a band that thinks hard about what they’re doing, and has returned from the road with something to say.

The videos from Pershing have also been playfully dark: the clip for “Think I Wanna Die” begins as a romantic idyll with the frontwomen of Eisley, and ends with the DuPree Sisters murdering the members of SSLYBY. It’s played for laughs – kinda. The “Modern Mystery” video is similarly pastoral, and similarly disturbing. The main character is a small-town paperboy beset on all sides by obstacles – some of which are fatally dangerous. But he’s determined to run his route at all costs, and must dodge a bullying rival, automobiles, a backyard minefield, sewers, UFOs, anti-gravity rays, and claymation aliens. Those bombs under the well-manicured grass are the clip’s central metaphor, and, in an important way, figure for SSLYBY’s prevailing aesthetic: the placid suburban exterior conceals peril, and you don’t have to dig too deep to encounter the traps. Meanwhile, the band sets up in a front yard and plays under shining summer sun, pausing only to collect the newspaper chucked back to earth from outer space, flaming upon re-entry into the atmosphere.

Many thanks to the Polyvinyl Records crew for bringing us this excellent new video. We’ve got our hands on a bunch of copies of Pershing for your on air giveaway needs, so drop us a line if you’d like to get your hands on some. If you need more info, call Andy Gesner at 732-613-1779 or e-mail us at info@HIPVideoPromo.com. You can also visit www.PolyvinylRecords.com or www.SSLYBY.com to find out more about Someone Still Loves You Boris Yeltsin.