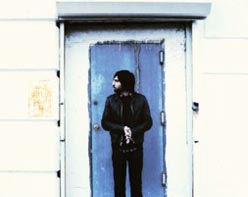 What’s going on? It’s Andy Gesner and the staff from HIP Video Promo dialing in with more great video action. You might know multi-instrumentalist Jimmy LaValle from underground heroes Tristeza or the Black Heart Progression, but if you haven’t heard The Album Leaf yet, you’re missing out on his most meditative and personal work. Mixing electronics, ethereal synths, electric piano, distant bells, found sounds, and pop hooks, LaValle’s solo project has captured the attention of fans of dreamy, romantic pop. In A Safe Place, the third LP released under The Album Leaf name, refines and clarifies the experimental approach taken on its two groundbreaking predecessors. Lead single “On Your Way” is the most approachable, direct song in the Album Leaf catalog, and one poised to bring the attention of a mass audience to LaValle’s luminous, immersive soundscapes.

If In A Safe Place is reminiscent, at times, of fellow architects of the imagination Sigur Ros, there’s a reason for that: this album was recorded in the Icelandic band’s hometown, and several members of the group play and sing on the record. Jon Thor Birgisson contributes vocals and acoustic guitar, sonic pioneer Kjartan Sveinsson adds glockenspiel, astral organ, and Wurlitzer piano, and Orri Pall Dyrason gives some of the songs a quiet, flexible rhythmic backbone. But where Sigur Ros often soars off into the stratosphere, Album Leaf songs twinkle and shine, and slip away elusively; they float like clouds or trickle like a stream. These tracks give the impression that a window has been opened up to a secret garden – misty, sparkling with wonder, sunlight streaming in through the canopy of foliage.

It’s a beautiful album – one that radiates some of the curious stillness of Brian Eno’s Another Green World – and “On Your Way” pours that radiance into a radio-ready vessel. The first minute of the track is a meditative duet: a gentle, winding guitar riff and pattering electronic beats. A tight glissando on the glockenspiel introduces a bigger beat, restrained Rhodes piano and analog synthesizer, and the twin voices of LaValle and Pall A. Jenkins of the Black Heart Procession. Split by an octave (LaValle takes the low part), they purr impressions and natural imagery, wild wishes to travel, and promises of forward motion.

Underground video collective Fluorescent Hill have matched the understated magic of “On Your Way” with a dazzling semi-animated clip that further communicates the song’s wild wonder. The setting: a clearing in an ancient, idyllic forest. The trees are verdant, the streams are clear, the stones are large and handsome; a fallen log provides a perfect seat, and the air sparkles with refracted light. But the stars of the video are the inhabitants of this landscape – small, friendly, unblinking balloon-like creatures. Their bold coloration belies their softness and fragility; they are curved, smooth, inoffensive, oddly sympathetic. They fumble with toy instruments, some several times as large as their bodies. Are they generating the music we hear?

As the song streams toward its conclusion – and LaValle assures us we’re “on our way” – the cartoon residents of the forest transform. With every hit of the crash cymbal in the final chorus, singly and sometimes in pairs, they evaporate into a cloud of luminous dust. The clouds dissipate, leaving their instruments untended. It is testament to the animation skill – and the humanity – of Fluorescent Hill that we wonder desperately where the little musicians have gone. Are they irretrievably lost, or have they ascended to a higher plane? The directors won’t tell, but they do offer a hint at the end of the clip: an actual field mouse emerges from its forest hideaway to stare quizzically at the camera, and inspect a fragment of an instrument that belonged to a balloon-creature.

It’s always great fun to get to work with our good friends Megan Jasper and Lacey Swain at Sub Pop Records. To help generate more excitement about The Album Leaf, HIP Video and Sub Pop are bringing you “The Album Leaf / Sub Pop Album Giveaway.” Any programmer that adds the engaging “On Your Way” clip during the months of September and October enters a drawing to win a super sized Sub Pop Vinyl prize package. Two second prize winners will receive all of Sub Pop’s 2004 releases on vinyl. The Grand Prize winner will get all of that PLUS copies of every piece of vinyl available on Sub Pop – a whopping 90 discs! The drawing will be held on the final day of the CVC Conference, October 16th. (Winners need not be present.) If you need more info call Andy Gesner at 732-613-1779 or email info@HIPVideoPromo.com. You can also visit the official website or Sub Pop to find out more about this Icelandic musical force to be reckoned with.