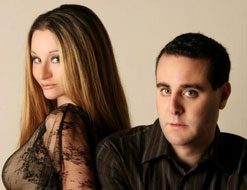 Hello programming partners in crime, it’s Andy Gesner and the staff at HIP Video Promo with an exciting new video straight from the mecca of pop culture – L.A. Resonating with freshness and the buzz of steel saw is the genre defying duo Eden Effect. Armed and loaded to the teeth with an array of musical styles and yet sounding like none of them at the same time, Eden Effect’s leading single “Blame Game” is ready to make a vivid splash of color in the monotone waters of modern urban pop competition.

You’ll be pleasantly surprised to discover that “Blame Game,” employs hip hop and pop radio friendly beats to work under a piano riff that is closer to an upbeat Elton John song than to any of today’s urban track. An apropos term coined for this sound is Neuropop; Neurotic New York pop, made in L.A (with a European). We couldn’t have said it better ourselves. This is sort of stylistic melting pot is what makes The Eden Effect more comparable to inventive modern mammoths like Outkast and The Black Eyed Peas, than to their one-dimensional contemporaries. The song also plays with the notion that we have a tendency to shake responsibilities to our community by blaming it on anyone but ourselves. Although the duo stands to make an intellectual and socioeconomic statement, they never do so by sacrificing melody, which constantly stays exciting and catchy throughout the duration of the tune.

Keeping with the theme of the lyrics, “Blame Game” delivers its message with a unique visual aesthetic. The “Blame Game” video is full of scenes that imitate popular game shows and shots of actual global events to comment on the social tendency to blame someone else for their problems. However, despite the gravity of the subject, the clip is always upbeat and features the sultry singer, Michelle, dancing away and singing the infinitely catchy chorus of the track. It’s safe to say that Eden Effect is the most exciting thing to transform Jeopardy (presented as “Geopardy” in the clip) since IBM’s Watson computer took on the reigning champions. After watching the video and hearing the song, it will certainly by a challenge to classify Eden Effect, but it really doesn’t matter what genre you try to fit them into, because in the end, the instantly memorable tune will find its own permanent place in your head!

“Blame Game” is the group’s debut standalone single, which has already been picked up by LA’s major radio station 103.1 INDIE to be played alongside buzz kings like Mumford & Sons and The New Pornographers, as well as classics like Cash and Costello. This is a big feat for any artist and especially impressive for a newcomer like Eden Effect. As the group is building their buzz and fanbase, they will be releasing several other singles into the open and eventually culminating in an album.

We are thrilled to be part of the foundation building process of this exciting new duo at the point of entry and urge you to join us hand-in-hand to expose this deserving talent into our atmosphere. If you need more info, call Andy Gesner at 732-613-1779 or e-mail us at info@HIPVideoPromo.com. You can also visit www.Twitter.com/TheEdenEffect to find out more about Eden Effect.