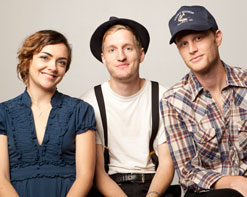 Hello music video lovers! It’s Andy Gesner and the staff here at HIP Video Promo, always excited to bring you the best new videos that are not only staying ahead of what’s hot, but also helping to define it. Today, we present The Lumineers. Maybe it’s because we have a soft spot for artists with a New Jersey pedigree, but more than likely it’s because we just love outstanding music that tugs at our hearts and invites to sing along, and The Lumineers bring that in abundance with their new video “Ho Hey”.

The band was born when bandleader Wesley Schultz lost his best friend, Josh Fraites to a drug overdose at the age of 19, and found solace in music with Josh’s younger brother Jeremiah. Growing up in Ramsey, NJ, Schultz once told the New York Times at the tender age of 9 years old that “I spend a lot of time on my drawings and it turns out good ’cause I’ve been practicing a lot.” Fast forward twenty years, switch the pencil and paper for a guitar and a microphone, a cross country move to Denver, CO and Schultz still has an incredible attention to detail and the results come to fruition in the form of the band’s self-titled debut full length album on April 3rd on Dualtone Music Group.

The band has elicited comparisons to the Avett Brothers, Mumford & Sons and Ryan Adams, to name a few. Fans have been drawn to the band by the raw nature of their songs, the lyrics that seem like they’re connecting with each one of us on a personal level, and a live show that can be best described as “barnburning”. In fact, Paste Magazine and Daytrotter have both given their nod of approval to the band’s performances, going so far as to name them to their best of 2011 lists. The band is poised to turn lots of heads at this year’s South By Southwest Festival and then immediately follow that up with a month long tour of the US that will bring them everywhere from Seattle to New York to Alabama.

The video for “Ho Hey” shows The Lumineers in their essence, connecting with their fans. Shot with haunting lighting, varying camera speeds and careful angles, “Ho Hey” has a way of taking what should feel sad but turning it into a memorable singalong that feels uplifting and full of life. It’s immediately clear that the band is not only in tune with themselves, but also immediately connecting with the audience. Many of the fans even take to duplicating their wardrobe throughout the video! On top of Schultz’s talents, bandmates Fraites and Neyla Pekarek keep up the energy with their passionate performances and radiant smiles. It’s hard not to jump right in with your own “Ho!” and “Hey!” and sing along to the chorus of “I belong with you, you belong with me, you’re my sweetheart”, and then once the video is over to go back and watch it again and again.

The Lumineers say that they are “born out of sorrow, powered by passion, ripened by hard work”. We couldn’t have said it better ourselves and truly hope that you will support this video to your fullest abilities. We would love to get you hooked up with some advance copies of The Lumineers and to get you out for an interview and a show when they are in your market. If you need more info you can contact Andy Gesner at (732)-613-1779 or email us at info@HIPVideoPromo.com . You can also visit www.DualTone.com or www.TheLumineers.com to find out more about The Lumineers