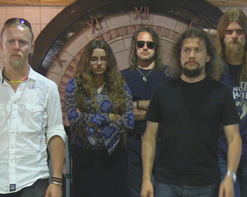 The country of Lithuania is a small country nestled on the shores of the Baltic Sea, and although it is usually overshadowed by its larger neighbors this is a country with a rich culture and history of their own. The Skys are a product of that culture and since 1995 the band has been cultivating an ever-expanding and loyal fan base throughout the European and western Asian regions.

Over this time they’ve garnered recognition everywhere from their home country, to festivals such as Crescendo Festival in France, Posinger Open Air in Germany, Eastern European Music Fest in Russia, and a spot at the New York International Music Festival where they won the Best International Band award!

The Skys’ music is a nod to some of the best elements of classic rock, honing in on the ethereal and ambient sounds reminiscent of the Gilmour and Waters classics of the 70’s. Soaring instrumental breaks, sparse yet powerful vocals and restrained tempos are the calling cards of their newest album, Colours of the Desert. The release caught the attention of Cinderella Records, whom the band signed an exclusive distribution deal with to get their music heard! The first video from the album is for the standout track “When the Western Wind Blows” and is a six minute gem you won’t want to miss!

The video begins with scenes of wandering landscapes of vast and open spaces. It could be anywhere, really, and we soon settle into the land of rural America and downtown Seattle as we follow lost souls wandering from one city block to another, and from one stop on the highway to the next. One particularly striking scene is a young lady resorting to undesirable activities at a local truck stop. Perhaps it’s a matter of wanderlust, and doing whatever has to be done to get to the next stop, or maybe it’s a commentary on the ways we take for granted the things that are good in our lives and are in constant need for something else, but this video is a delicate balance between powerful imagery and relaxing music that will make the time pass without blinking an eye.

We are very pleased to be working with The Skys to bring you this terrific video clip and are here to do anything we can to get this into your programming. Please contact Andy Gesner and the HIP Video Promo staff at (732)-613-1779 or email us at info@HIPVideoPromo.com . You can also visit www.TheSkys.com for more info.