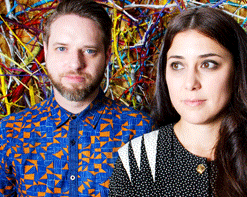 In the indie world, DIY is a term bandied about so often that the word has lost all meaning. LA-based electro-pop favorites Tic Tic Boom!, however, truly keep it DIY and all in the family. The duo, composed of real-life couple Mike DeLay (instrumentation/engineer) and Leilani Francisco (vocals/keys), have created their own hyper-colored universe of pulsing beats, sweat, soaring vocals and frenetic live shows where everyone is invited, and having a good time is the only rule. With that said, lyrically they aren’t afraid to explore some deep subject matter. In their music video for their undeniably addictive, trance-inducing, heavy-hearted new single, “How It Ends,” they share a story of a once blissful but ultimately ill-fated couple.

Recalling the heart-on-sleeve honesty of Metric with the party-starting energy of The Naked and Famous, Tic Tic Boom! are a unique synthesis of past and present influences, culminating in dance-floor ready pop that is simultaneously smart and universal. On their fourth EP, It’s the Heart That’s a Fool, which features “How It Ends,” Tic Tic Boom! have come of age with their most technically and lyrically accomplished work, but it’s the heart, pathos and playfulness that truly shines. “The EP is about dreamers,” explains Francisco. “It’s about the sacrifices we make, it’s about being an artist while having to pay the bills, and doing shitty jobs we hate.” And dream they do. “Since we are able to record our own music, we are constantly writing and constantly producing,” explains Francisco.

Tic Tic Boom! have accomplished a lot throughout their relatively short career including performing an official showcase at SXSW in 2012, playing the Musician’s Institute tent at Coachella Music Festival in April 2012, their music has been placed in programming on popular TV networks (ABC Family, Showtime, MTV, Bravo, and the Style Network), the duo have been featured on KROQ Locals Only, and they’ve been heard on over 100 college radio stations across the United States and Canada including KCRW in Los Angeles.

The video for “How It Ends,” masterfully directed by singer Leilani Francisco, and featuring two of their close friends in the lead roles, follows a man trying to keep on keeping on after his partner passes away, but his broken heart is slowly shattering his will to live. The spirit of the girl watches over him and witnesses him becoming weaker with every passing day. The imagery of a once strong and happy man now unable to get back on his feet without his lost love definitely provokes thoughts of “What has happened to the girl?” and “Was it a tragic accident or some sort of illness?” The powerful video certainly leaves viewers with questions, but that’s clearly the intent of Tic Tic Boom! The video is a fitting backdrop to a heart-wrenching, yet very irresistible song.

For information on Tic Tic Boom!’s video for “How It Ends” or their utterly fantastic new EP, It’s the Heart That’s a Fool, please contact Andy Gesner and the HIP Video Promo staff at (732)-613-1779 or email us at info@HIPVideoPromo.com . You can also visit www.Facebook.com/TicTicBoomMusic for more info.