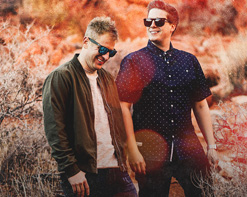 “Gamma Gamma” in 2014. “Anchor” in 2015. “Blackout” in 2016. The soon-to-be seminal EDM duo Tritonal has been giving us hit after hit over the past 3 years. Fast-forward to late-February of 2017 and we are confident that Tritonal has brought another winner to the table with their newest track, “Strangers.”

It’s been an incredible 12 months for the Austin, TX duo. In 2016, Tritonal surpassed 53 million streams comprehensively on Spotify, over 10 million of which was attributed to the Chainsmokers collaboration, “Until You Were Gone.” The pair has also remixed Adam Lambert’s hit “Ghost Town,” which reached millions of listeners on iTunes, SoundCloud and Sirius via the podcast, “Tritonia.”

Ask any loyal fan of the two musicians what makes them so incredible, and they will not hesitate to tell you that Tritonal is an experience that has to be seen live to fully appreciate and understand what they do. With an extensive US tour where they sold out legendary venues like Terminal 5 in New York City and The Shrine Auditorium in Los Angeles, and are poised to bring the masses an even bigger and better live show on the momentum generated by “Strangers.”

The ethereal, elastic video for “Strangers” features Lil Buck, a dancer who has been on a dazzling escalation since the premier of his Louis Vuitton by Nowness piece and his Superbowl Lexus commercial. The video starts with Lil Buck dancing openly with large, hyperbolic movements, only to have his physical space condensed as the song makes its progression. Lil Buck’s performance is picturesque, spirited and full of raw sentiment. “Strangers” will take you on a journey full of lusty escapades, nothing but brazen behavior and wicked acts being contemplated, even just for a night.

All of us here at HIP Video Promo are always excited to be a part of the Tritonal team and are confident that Enhanced Recordings will always deliver the cream of the crop. They’ve once again managed to top themselves with “Strangers.” Please get in touch with us here at HIP Video Promo and let us know what we can do to help get this video into your programming. Contact us at (732)-613-1779 or email us at info@HIPVideoPromo.com. You can also visit www.TritonalMusic.com or www.EnhancedMusic.com for more info on Tritonal.