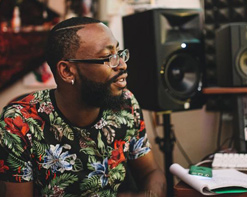 Turner Jackson is an artist who understands the power of music. He knows that he is “responsible for the message in my music, whether it’s that of destruction or positive impact.” His new video, “Red Plastic Cup,” was described by West Word as an “ode to the party” that manages to “make it genuine without turning into parody.” That being said, let’s not forget that at its core Turner Jackson’s music is all about bringing people together in a fun, refreshing way.

Huffington Post perfectly encapsulates the sound of Turner Jackson as having “a deep influence from soul and funk, his music speaks for the younger generation while still identifying with the older generation.” His full length album, also titled Red Plastic Cup, is chock full of tunes that Huff Po accurately describes as having “elements of ‘60s gospel, ‘70s funk, ‘80s new wave, ‘90s hip hop, and modern electro, indie and pop.” It really is the perfect soundtrack to any party. Right on cue, the new video for “Red Plastic Cup” delivers exactly that.

Imagine the biggest, baddest, party you can and you have the “Red Plastic Cup” video. It’s all about the feel good vibes, with Turner leading the way, cup in hand. The room is swollen full of revelers and roller skaters alike, each one embracing the moment at hand, culminating in an event for the ages. In his own words, Jackson says “Music is about sharing thoughts and sending energy to another person.” As is evident from the “Red Plastic Cup” video, that energy has been shared far and wide. Of course, the morning after might be a little rough but let’s be real, it’s totally worth it!

Here at HIP Video Promo, we live for discovering new talent and helping them get their just due. We’re confident you and your viewers will embrace Turner Jackson as much as we have, and we are anxious to do anything we can on our end to help get it into your programming. Please get in touch with us here at HIP Video Promo at (732)-613-1779, or email at info@HIPVideoPromo.com.