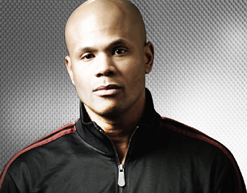 Howdy friends, it’s Andy Gesner and the staff from HIP Video Promo, here with a new clip from a telegenic rapper with terrific microphone presence, laid-back charm, and rare composure. Tye Banks represents Raleigh, N.C. proudly, and when he does, he makes sure you know you’ve heard him. The first cut on Living A Dream, his sophomore release, is a shout-out to the North Carolina capitol – both of his colorful full-length albums are crammed with tales set in his city’s neighborhoods. When Banks and director Randy Bernard chose to shoot the clip for “I’m Still Cool” on the streets of downtown Raleigh, it couldn’t have come as a surprise to the rapper’s many local fans; considering his close identification with his hometown, could there have been any alternative?

Truly, it’s no exaggeration to call Tye Banks the face of urban North Carolina. As comfortable in front of the camera as he is with a microphone in his hand, his television appearances have made his appearance a familiar one throughout the Research Triangle region and beyond. He’s been featured in musical commercials for the State Lottery, and sober-sided advertisements for Duke University Hospital, NC Quitline, and Blue Cross and Blue Shield. Banks recently guest-starred in an episode of real-life cop show NC Wanted; viewable beyond the borders of his home state , he’s been featured on One Tree Hill, the indie movie White Men Can’t Dance, and in many other film projects. Many young rappers freeze in front of the lens; when the camera light comes on, Tye Banks knows exactly what to do.

That same confidence is apparent in all of his recordings. Originally recorded for the motion picture Nerds Of Steele, “I’m Still Cool” is a declaration of independence from those who’d hold the rapper back. He’s not screaming for vengeance; in fact, he’s not even angry. Tye Banks is so far above the haters that he’s not even bothering to respond to their backbiting – he’s just letting them know that no matter what they try, his equilibrium won’t be affected. And even though he’s not the sort of guy to rub it in, his easygoing flow – so reminiscent of the young LL Cool J – speaks volumes about the emcee’s unshakable faith in himself and his talent.

Randy Bernard is another North Carolinian with a vision: he’s part of Back Focus Films, a Research Triangle production team that has worked with non-profit organizations, businesses large and small, and enterprising area musicians. Before their camera, Tye Banks looks every bit the part of the rap star: he’s charismatic, commanding, quietly powerful, and economical in his gestures. The young protagonist is tormented in class, and picked on by schoolmates twice his size – but he keeps his head, straps his backpack on his shoulders, and walks on. Just like the emcee, he maintains his cool under fire, and proves himself the better man.

We’re very excited to have the chance to work with Tye Banks himself and Heidi Lawson at Tytanium Music to bring you this exciting new video. We’ve got plenty of copies of Living A Dream to satiate your giveaway needs, so give a shout and we’ll hook it up! If you need more info, call Andy Gesner at 732-613-1779 or e-mail us at info@HIPVideoPromo.com.