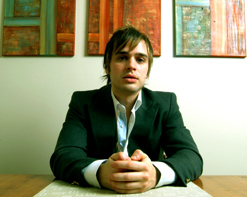 Greetings from the Garden State! It’s Andy Gesner and the tireless staff from HIP Video Promo bringing you another piece of Jersey pride, but with a national reputation! When the Matt Schuman-directed clip for “Privacy Attracts A Crowd” made its MTV debut, Val Emmich earned a remarkable distinction. Never before had an unsigned artist appeared on TRL (and it hasn’t happened since). The fact that he was able to buck the system in such a dramatic fashion is a testament to the devotion of Val’s fan-base – one he’s built through relentless touring.

That was back in 2002. Since then, Val has put out an album on an indie (Slow Down Kid), re-released that album through a major, and followed it up with a self-released set (Sunlight Searchparty) which quickly became one of New Jersey’s best-loved records of 2006. Through it all, the singer-songwriter has retained that core of committed listeners, and reaffirmed his status as one of the Garden State’s unique and endearing musical voices

Val has also continued to work with Matt Schuman. While he’s expanded his iconography and collaborated with other video directors, the pairing of Emmich’s earnest and intense performances and Schuman’s quirky visual sense has always proven aesthetically successful. Years spent performing on stages, large and small, across America, has made Emmich extremely comfortable in front of the camera. So comfortable, in fact, that Sunlight Searchparty comes with a Schuman-directed, behind-the-scenes DVD (It’s Only Your Life) that chronicles the makings of the album and the artist’s creative process.

It’s Only Your Life captures a songwriter who is impossible not to like: a direct, down-to-earth, emotionally-honest searcher with a great rapport with his fans and bandmates alike. Sunlight Searchparty shares that warmth and expansiveness, too: this is Val Emmich at his boldest and most uncompromising, pouring out catchy, irresistible melodies and grand, sweeping choruses. Produced by Jason Cupp (The Elected, Finch) at the legendary Shore Fire Recording Studio in New Jersey, Val and his band have offered up a radio-ready dazzler – a major-league sound, with no help from a label.

In keeping with Val’s generosity, we’re including two videos from Sunlight Searchparty on this reel. The first, for “The Only One Lonely” is, in our opinion, the best Emmich-Schuman collaboration yet: a clip that exposes something essential and irreducible about Val’s unique personality, his independent spirit, and his infectious enthusiasm for music. It’s also beautifully-shot and edited, proving that Val isn’t the only member of this partnership who has raised his game since 2002. The video opens with shots of a glum Val in a country house, slowly walking through the quotidian activities of a drab morning: eating cereal, dressing, brushing his teeth. But he’s got a cure for his blues, and it’s right there in the house. Val finds out he’s not ‘The Only One Lonely’ with a little help from some very unique housemates. But do they really exist, or are they merely a figment of his imagination? You decide.

The next video on the reel is for the lead single from Sunlight Searchparty, “This Ship’s Going Down,” directed by Steve Birnbaum. The clip takes a different approach than “Lonely,” but it’s equally distinctive. The band performs the song of loss and fury in front of a blood-red backdrop scrawled with white letters, this, combined with the fast-paced edit, gives the feeling of claustrophobia and panic… as if it is about to quite literally explode. One by one, various characters approach the camera with pictures of loved ones or items that represent some sort of personal turmoil; they hold these items up as if to invite the viewer into their story, some weeping, some looking to heaven, some simply distraught. Val himself punctuates the sorrow with an emotive and intense performance that reinforces his status as one of the most exciting and committed frontmen in the musical underground.

Val Emmich is not only a homegrown artist from New Jersey, but he is also a good friend of HIP, and we are thrilled to be working with him and Ralph Hanan at Pi Artist Management to bring you this stellar new video! They have been kind enough to set us up with plenty of copies of Sunlight Searchparty for all of your on-air giveaway needs, so don’t hesitate to be in touch if you’d like to get your hands on some copies! If you need more info, call Andy Gesner at 732-613-1779 or e-mail us at info@HIPVideoPromo.com. You can also visit www.ValEmmich.com to find out more about Val Emmich.