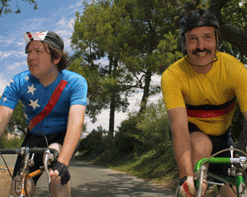 The band’s pop-tastic music has appeared in such popular television programs as Raising Hope, Cougar Town, Camp, and more as well as television commercials for GMC Trucks and Sonic. When not recording hot rock albums, the band has also found time to tour Japan, where they are beloved with their fans, and also serve as the house band for Triumph the Insult Comic Dog at the Bonnaroo Music Festival.

Directed by Tim Fornara, “Go!” is a wildly entertaining music video that will leave you wanting more. Rich with comedy and social stirs, the clip highlights the best qualities of this eccentric band. The video starts with a heated bike race between Hill and Costello and not long into the race their eyes are caught by a pair of beautiful Japanese women in traditional dress. They are soon in hot pursuit, because something about these ladies has to be theirs. We’re talking about their clothes! The way it plays out is incredible to watch, and the conclusion is pure gold. “Go!” is a song that captures the best of Valley Lodge and serves as a teaser to fans that do not know their forthcoming album Use Your Weapons. With a style that is incomparable to any mainstream band nowadays, “Go” is a necessity for any car drive.

In support of the album’s release, Valley Lodge will be playing live in New York City and beyond, and another tour of Japan is in the works for 2014. For more information on this exciting new band, please contact Andy Gesner and the HIP Video Promo staff at (732)-613-1779 or email us at info@HIPVideoPromo.com . You can also visit www.ValleyLodgeBand.com for more info.