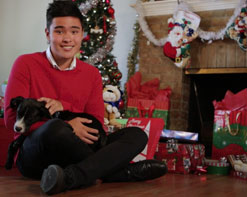 With his previous video for “Gentleman,” Will Jay set out to show that chivalry isn’t dead and that being a gentleman is still en vogue. The song endeared him to viewers far and wide and the lighthearted video was the perfect personification of this brilliantly talented artist.

For those of you itching for more, we’ve got good news! Will has returned with another heart melting clip that not only shows his genuine warmth but also comes in the form of the most adorable Christmas video we’ve ever seen. “Christmas Come Early” has everything we could hope for in a holiday clip; lights, tinsel, presents, Christmas cheer, and most importantly a surprise pack of adorable pooches!

“Christmas Come Early” hits like a classic doo-wop number given a modern pop touch. It’s this ability to appeal to audiences of all genres that has made Will such a worldwide success. From his time in the pop group IM5 (which featured American Idol finalist Dalton Rappatoni) to his own time on the screen as a massive star on The Voice of China, Will has been relentless in his mission to bring his music to the masses. It’s this sort of devotion that’s made him a formidable presence on YouTube, where his diversity and skills earned millions of views and a legion of loyal followers.

In the “Christmas Come Early” video, Will attracts a different group of loyal followers. The doorbell rings while he puts the finishing touches on decorating the house for December 25th, like an early present of his own, a group of furry, playful pals come bursting in. Being the animal lover that he is, there’s just no way Will can resist the chance to snuggle up to each and every one of the curious canines. It’s not just for show, either, as Will is using the opportunity to bring attention to the millions of shelter pets currently waiting for their forever homes. All of the dogs in this video are rescues that have either been adopted or are currently available. A roll call at the end of the clip showcases each pooch, complete with info on the generous organization fostering them.

We’re proud to be a part of the Will Jay team and to help him spread the word on his music. His tremendous generosity is eclipsed only by his exceptional musical talent, and we expect this to be the first of many years to come of “Christmas Come Early” making the rounds in holiday playlists! Please get in touch with Andy Gesner and the HIP Video Promo team at (732)-613-1779, email us at info@HIPVideoPromo.com . You can also visit www.WillJayMusic.com.