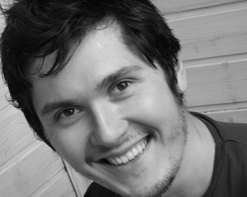 Just when you thought the holiday season was over, Yury Birilov introduces a dark take on the meaning behind Christmas in the following compelling clip. HIP Video Promo is pleased to introduce “Jingle Bams” and this new talent to the music scene.

Birilov’s most recent album Make It Loud was recorded at a home studio in a mere two weeks. The record includes eleven tracks that are stylish and contemporary, and the artwork is a must-see: tattoo artist, Alexander Pavlov, made an exclusive painting just for the Make It Loud’s booklet. In late September, the video clip for the single “Dollface Girl” premiered and was a smash hit on YouTube, gaining Yury a strong fanbase.

Yury is also the creator of Loud Music Awards, which took place in St. Petersburg, Russia last year. LMA is the first Russian global music award. Gary Numan, Sergio Pizzorno, Black Sabbath and Tyler the Creator became the first winners of LMA awards. Make It Loud established the prize in the Album of the Year nomination and the “Dollface Girl” clip received the Video of the Year award.

Just in time for Christmas and the New Year, Yury Birilov released “Jingle Bams.” Katya Shestakova and Dasha Karaseva performed the choir section of the tune, and they even perform and star in the haunting video clip. As well as being the leading actor, Birilov directed the mini-film and received some help in the photography department by Pavel Smirnov. “Jingle Bams” is a bit of a horror thriller that pulls you in from the beginning, and never lets you go, while fearlessly calling out the commercialization of the Christmas holiday and reminding us that there is more to the season than just spending money! Now that the cheery-eyed view of the holidays begins to fade we can look back with a bit more introspection on this time of year!