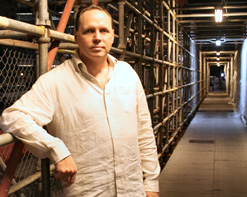 Ever since the 1968 release of The Mason Williams Phonograph Record, musicians have been inspired by “Classical Gas”. Williams’s Grammy-winning instrumental piece was enormously popular, and it’s easy to hear why —  it’s not only compositionally brilliant, it’s catchy as heck, too. “Classical Gas” has been covered by artists as disparate in style as Les Fradkin of Beatlemania, Larry Fast of the Peter Gabriel band, and the easy-listening Midnight String Quartet, and it’s been licensed by news programs, advertisements, and hundreds of directors looking to add a dash of class to their films.

But there’s never been a version of “Classical Gas” quite like the one done by the Texas multi-instrumentalist Antherius. The acclaimed electronic musician has paired his recently released single “Classical Gas (the Victory Remix)”  with this new music video entitled “Classical Gas (Gasoline Version)”  that cleverly alludes to the conceptual underpinnings of the original recording. Before a printer error prompted an abbreviation, Mason Williams initially called his hit song “Classical Gasoline” – and Antherius’s clip is rich with vintage footage of cars, highways, rigs, tankers, and the grimy, glorious infrastructure of the petroleum industry.

As a Greater Houstonian, that’s something Antherius knows plenty about: the oil industry, for better and for worse, is the backbone of his region. He’s also been chasing the perfect mix of “Classical Gas” for awhile, too, and with this new version, he’s arrived at his destination. He cut his version of the Williams classic on the heels of the critical success of the rich, varied, and ambitious 2006-01 and 2008-03 Antherius albums – two sets filled with his own original compositions in a distinctive, personal style that blended the inventiveness of progressive rock with the futurism of electronica and the cinematic color and sweep of ambient music. Antherius applied everything he’d learned while making his own albums to his recording of “Classical Gas”, and in so doing, he’s both updated and invigorated a piece that has never gone out of style.

Antherius doesn’t appear in the video for “Classical Gas”, but in a way, he doesn’t have to: it’s immediately apparent that all the images he’s stitched together – chronologically, from grainy black and white to bright modern color – are drawn from deep places in his memory. Ours, too.  Automotive machinery and petroleum revolutionized the 20th Century, and they continue to shape, and shake, our understanding of the national experience. To watch this clip is to understand the spell of the open road, the rhythm of the assembly line, and the perils of petroleum dependency. It’s all classically American, and here, it’s paired with a classic American tune.

Here at HIP Video Promo we’re profoundly thrilled to share Antherius’s true talent with the help of the wonderfully crafted, fully realized “Classical Gas” music video. It’s our sincere hope that you and your viewers will embrace the “Classical Gas” clip, share it on your socials, and add it to your programming in a timely fashion. Rest assured we will have plenty of outstanding Antherius merch to set up online/on-air contests and giveaways throughout the campaign, so don’t hesitate to let us know if you’d like to get your hands on some. Please contact Andy Gesner and the HIP Video Promo team at (732)-613-1779, email us at info@HIPVideoPromo.com. You can also visit www.Antherius.com for more info on Antherius.