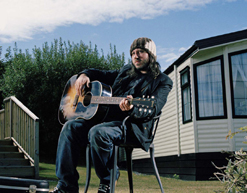 Hello, fellow rockers and rollers! It’s Andy Gesner and the HIP Team, bringing you yet another outstanding clip from one of the UK’s most talked about artists! Since winning the Mercury Prize in 2000 withThe Hour Of Bewilderbeast, Damon Gough, aka Badly Drawn Boy, has refused to stand still. He’s scored soundtracks (most notably the pop-smart About A Boy for the Nick Hornby-inspired movie of the same name), collaborated with British rock royalty and worked with Oxfam, and made some unlikely appearances in the UK top ten. Yet his writing has remained dependably brilliant: a gorgeous amalgam of Belle & Sebastian-style twee, Crowded House alt-pop cool, and gleaming, mysterious Madman Across The Water-era Elton John. Few hushed-voice singers are quite so direct, and few piano-pop songwriters can craft tunes so aching, or so memorable.

With Born In The UK, his fifth full-length, Gough has cemented his status as England’s most thoughtful left-of-the-dial hitmaker. The Springsteen reference in the title is no accident; Gough is a fan, and with this record, he’s upped his wattage and raised his sights. That’s not to say that Badly Drawn Boy has become an arena rocker – though, honestly, a few of these newer songs wouldn’t sound out of place at Wembley. He’s decided to join countrymen Damon Albarn, Ray Davies, Mike Skinner, and Andy Partridge as a chronicler of the peculiarly British experience. Keeping the lyrics personal and the focus on the trials of growing up, Gough has penned a set that’s bound to resonate with Anglophiles worldwide.

The cover of the album shows Gough reading a tabloid at a typically British cafe. But while he’s looking outward at the camera, the songs on the record continue the topical soul-searching that made 2004’s One Plus One Is One such a fascinating listen. “Nothing’s Gonna Change Your Mind” is a sweeping ballad – a piano-plus-strings doozy that sounds to our ears like the number that’ll land Gough on the Top Of The Pops. Upon protracted exposure, though, it’s clear that at heart it’s typical Badly Drawn Boy: a sharply-written love letter and statement of belief in love set to an inventive melody that often feels like a minor miracle.

Badly Drawn Boy’s songs – particularly the soundtrack work – are sometimes described as “piano-driven”. In his clever clip for “Nothing’s Gonna Change Your Mind”, director Dougal Wilson literalizes the metaphor. Gough takes a seat at the front of his automobile, but instead of a steering wheel, he turns a piano key and reveals eighty eight keys under the dashboard. The second he strikes chords, the car begins to move – and it keeps on going until he pauses before the bridge. Gough motors through city traffic, and then takes his auto on the highway; when he breaks down, he calls a mechanic for a very literal “tune up”. The road map turns out to be the sheet music to “Nothing’s Gonna Change Your Mind”, and in the clip’s most spectacular sequence, the scrubbers and rollers at a car wash perform a psychedelic piece of choreography (anybody who’s ever listened to music while going through the wipers will instantly identify!). In the UK, Badly Drawn Boy already has an established reputation as a reliably inventive video star; “Nothing’s Gonna Change Your Mind is the clip that brings the rest of the world into the cult.

As always, we are thrilled to work with Krista Crews and the wonderful folks at Astralwerks to bring you this amazing video. We will have an abundant supply of Born In The UK CDs to meet all of your give away needs, so please don’t hesitate to get in touch if this artist gets you excited. If you need more info, call Andy Gesner at 732-613-1779 or e-mail us at info@HIPVideoPromo.com. You can also visit www.Astralwerks.com or www.BadlyDrawnBoy.co.uk to find out more about Badly Drawn Boy.