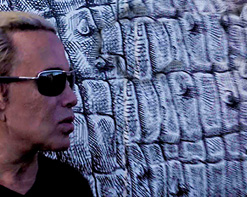 Born and raised in New York City, it comes as no surprise that Barry Rock is a true rock and roller. Starting young and drawing lifelong inspiration from artists like The Beatles, Billy Joel, The Beach Boys, and The Cars, he got his own musical start by playing in bands in college in the 1970s where we wrote “bubblegum songs”. While he spent the 80s focused on a career outside of music and his marriage, Barry Rock never stopped playing music. Over the past four years, he’s found a new drive and completely devoted himself to furthering his musical career.

With this new passion, Barry Rock has found himself playing alongside a new group of musicians. Jimmy Sarle (of Johnny Maestro and the Brooklyn Bridge) joins him on lead guitar; Lou Agiesta (who’s the drummer of Johnny Maestro and the Brooklyn Bridge and he’s played with John Lennon, Aretha Franklin, Celine Dion and many more) joins him on drums; Lenny LaPinta (who he describes as the “best sax player in the freaking world” who’s played with some major heavy hitters) joins him on saxophone; and Matt Friedman (who was Billy Joel’s personal piano played in the Broadway show Moving Out) joins him on keyboards. To top it all off, they work with producer and bass player Mick James, for a retro sound with a happy feel and songs that will surely remain stuck in your head.

Like many musicians before him, Barry Rock is a night owl; and sometimes when he can’t sleep lyrics will “fall in place like dominos” as he starts putting chords together. “Closer” is a sensual and romantic tune with a video to match. Shot on Coney Island and Evolution Studios in Farmingdale, New York, we see Barry playing guitar on stage and walking around an amusement park, all the while a lovely lady (played by a girlfriend of his who flew in from Colorado) comes to join him in his apartment as he sings, “Baby get closer, closer, baby get closer.”

Barry Rock is ready to rock your socks off with his undeniable catchy hooks, and we’re absolutely elated to bring him “Closer” to the worldwide recognition he deserves. Please let us know what we can do to get the “Closer” music video into your much cherished programming! You can find out more by calling us at (732)-613-1779 or emailing us at info@HIPVideoPromo.com or visit www.Facebook.com/BarryRockMusic for more info on Barry Rock.