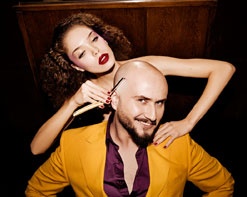 It was August of 2011 when we brought you the video for “Electric Girl” by Turkey’s favorite techno dance artist, Bedük. The propulsive and upbeat clip made quite the impression on all of us and we’ve been keen on his every move since, which has make us all the more excited for the new “DiscoBreaker” video we present to you today. His unique ability to merge infectious beats and rhythms along with rock solid dance melodies have helped establish Bedük as one of the most sought after and critically acclaimed artists in the European nation’s music scene, almost singlehandedly changing the public’s concept of popular music. His Wikipedia page describes his music as “where the Bee Gees meet with Robert Palmer and Right Said Fred as they decide to go to a contemporary dance-pop concert to beat their brains out”. This might be one of the craziest descriptions we’ve ever heard for an artist, but it also might just be one of the most accurate as well.

Bedük has been delivering hits to his homeland crowds with 2007’s Even Better, 2009’s Dance Revolution, and our personal favorite, 2011’s GO. Now he is back in the limelight with his newest effort, entitled FUL, courtesy of Audiology Records. Never one to sit still and let the moss grow, Bedük keeps pumping out new and even more massive tracks. Chock full of new songs and remixes from artists like Funkmaker and DJ Tarkan, FUL shows that even after establishing himself as the master of his art that Bedük still has what it takes to grab our ears and draw us in for a long, enjoyable listen.

The “Electric Girl” video captured what may have felt like aristocracy gone crazy. In a gleaming all white mansion Bedük and the opposing dance partner dueled it out in the fine elegance of pristine wealth. In “DiscoBreaker” however, our dancing man and his trademark glasses make their way down into the underground dance. The darkly lit scene comes alive with the illuminated dance floor and the robotic like glares of the characters involved. A solo figure stands on her own in the middle of the floor and each time Bedük dispatches a challenger onto the floor she takes everything they can throw at her but in the end her moves are just too powerful and dominating and she makes quick work of the others. The only option left is for Bedük himself to meet her on the dance floor in a battle for ages. There’s only one way that this can end for these two…..

We’re incredibly excited to once again be teaming up with the Creative Entertainment Network to bring you this international sensation. Your support last time of Bedük was greatly appreciated and it’s our hope that you will double up your efforts this time! We’re ready to assist you with whatever you may need to get this video into your programming, including copies of FUL and other Bedük goodies. For more info contact Andy Gesner at HIP Video Promo at (732)-613-1779 or email us at info@HIPVideoPromo.com . You can also visit www.CENetwork.com to find out more about Bedük.