Bianca Ingram “What I Want” 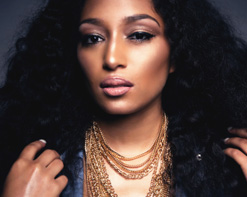 Being born into a Grammy award-winning family of singers, songwriters, and musicians, it makes sense that she’s been training to be prepared for any stage at any time for her entire life. Bianca took her first step into the spotlight when she released her debut album, Linguistics, in 2013, officially marking the passing of the Ingram “mic.” Bianca has headlined as a solo act for various venues along the east coast. Her single, “Catch 22” became a Top 10 hit on the European 2016 Music Week Urban Chart. She is fresh off of her lead role in the “Dancing In The Streets” North American Tour and is preparing to go on her first international promo tour to Europe. Bianca is currently working on a sophomore album, Assimilation, and two EPs that will be released throughout 2017.

The opening for “What I Want” gives viewers a peek into the mind of Bianca, proving that she has the artistic vision to go as far in this ever-changing world of music. Sampling from the SOS Band’s “Take Your Time (Do It right)” from the 1980’s, the song has a pseudo-disco feel that will get listeners on their feet. Presenting lavish and royal scenes of a young, teenage and present-aged Bianca Ingram, this video tells the story of Bianca’s wildest dreams. Avant-garde and delightfully over-the-top, no extravagance or idea was sparred in this visual experience. Filled with dancing, entertainment and nothing but a good time, “What I Want” is unique and definitely not to be overlooked.

Equal parts carefree and determined, “What I Want” is a song and video combination that saturates all of the senses with maximum fulfillment. With such a captivating product at her disposal, we truly hope programmers and viewers will embrace Bianca Ingram as excitedly as we have here at HIP Video Promo. You can find out more by calling us at (732)-613-1779 or emailing us at info@HIPVideoPromo.com. You can also visit www.WhoIsBianca.com for more info on Bianca Ingram.