Bif Naked “Nothing Else Matters” 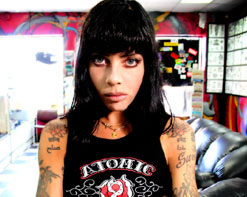 Greetings to all my music video programming friends! It’s Andy Gesner and the staff from HIP Video Promo, hoping you had an enjoyable and relaxing holiday season. Here at HIP, we’re ready to rock into 2006 with Bif Naked – a true independent, ferocious frontwoman, and an uncompromising performer who has never been shy around the camera. Her exhilarating fusion of pop-punk melodicism and aggressive rock force have landed her a solid and loyal fan base. In her native Canada, Bif is considered a bona fidestar, spawning imitators bewitched and emboldened by her outspoken persona, her irreverent sense of style, and her profound emotional honesty. Throughout Bif’s career she has been upfront in stating “to thine own self be true” and in her new video, a cover of the classic Metallica track “Nothing Else Matters”; she shares her isolated touring regime with audiences. Validating that there is more beyond stadium lights, that if you don’t have your self “nothing else matters.”

Bif is associated – and rightly so – with the generation of female performers who strapped on guitars, seized radio by the throat, and broadcast their passions, their outrage, their disgust, and their unwillingness to be subjugated or disregarded. But while many of her peers have made peace with the mainstream and exchanged their pain for something altogether more comfortable, Bif remains a maverick, challenging conventions and agitating on behalf of her own desires. Superbeautifulmonster, her latest album, is a continuation of the approach that brought her fame: a battery of punk rock shouters, aching power ballads, and well-chosen covers, all delivered in a voice that can communicate both warmth and fury with equal intensity. Her latest effort has already achieved gold status in Canada, and is poised for platinum here in the states.

A devotee of heavy music, Bif Naked understands its grim portents and its immense power, and she has become skilled at gathering moments of glowering beauty out of its folds. Like the rest of us, she’s a Metallica fan, and she’s made it clear that she considers “Nothing Else Matters” one of the great, defiant American love songs – tough, clear-eyed, and arresting in its gorgeous brutality. Bif’s interpretation of the classic ballad is faithful to the tone and feel of the original version: the verse arrangement is poised and majestic, and the guitars slam in on the chorus with the somber force of the original. But while James Hetfield had to bellow sections of the song, Bif is a flexible interpretive singer – and she’s able to give this love story a valence and charge that the Metallica frontman could not.

Bif brings a fresh female perspective to an already proven angst anthem. There’s something solitary and haunted about the perspective of “Nothing Else Matters”: the narrator sings of his liberation from worldly demands with sadness, as if his unwillingness to conform to expectation has sprung him loose from ordinary human society. Bif’s version of the song tempers some of Hetfield’s suppressed rage – but it’s still there, just below the surface. In the clip for “Nothing Else Matters”, we’re treated to concert footage of the dynamic performer, on the road, and within her element before audiences of thousands. But as she journeys from stage to stage, or sits in anticipation on a tour bus or in a chilly hotel room, she’s alone. The juxtaposition of images of mass celebration and those of quiet and private longing tease at the paradox of the performer – the paradox of Bif Naked, really – isolated within the crowd, searching for a meaningful connection, on her own terms.

Here at HIP we are very excited to be teaming up with bodogMusic to bring you this compelling new clip from one of indie rock’s superstars! We will have plenty of copies of Superbeautifulmonster for on-air giveaways, so please don’t hesitate to get in touch. If you need more info call Andy Gesner at 732-613-1779, or email info@HIPVideoPromo.com.